Last week on SRGMP Li'l Champs 16, the Sambhandagala Sangeetha was a hit. Family members sang alongside the puttanigalus giving us many 'awww' moments 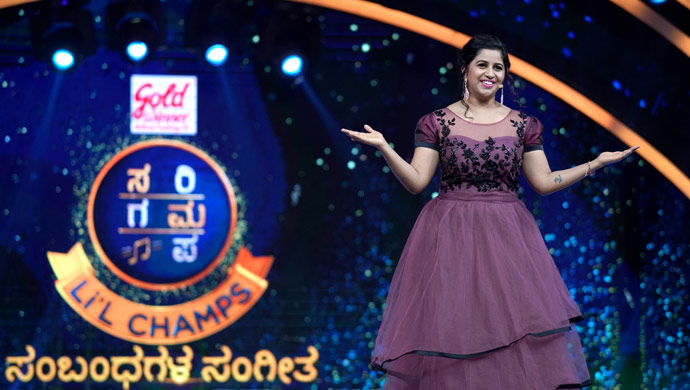 One of the best rounds on the 16th season of Sa Re Ga Ma Li’l Champs was the Sambandhagala Sangeetha round aka the family round. And I have a great reason to say so. You see unlike all the other rounds be it the Getup round, the Celebration round or even the ‘All-Time Heroes’ round, the Family round had a member from the contestant’s family singing alongside them. We all know that when loved ones are standing beside you doing something that you love, the task becomes more fun and you gain more confidence. Similarly, last week too, the puttanigalus had great fun singing alongside their family members and entertaining the audience and judges alike.

Hostess Anushree welcomed the judges in her own unique way and also told us the real names of Rajesh Krishnan Sir and Nadabramha Hamsalekha Sir. Following this, she then invited all the family-participants on the show and introduced them to the audience. So without further ado let’s check out some performances and the scorecard for the others shall we?

The father-daughter Jodi of Someshwar and Sakshi Kallur gave a golden-buzzer performance on the song Jotheyagi Hothavagi from the film Rathasapthami.

Monamma and her beloved older brother Manjunath sang the folk song Madadiya Maathu Keli and touched the audiences and judges hearts alike. They got a well-deserving golden buzzer from the Mahaguru.

From the movie Gaalipata, Manjunath Swami and Abhisyanth sang the lovely song Aakasha Ishte and earned their golden buzzer after some comedy on stage.

Gurukiran and his mother Parvathi performed brilliantly on the melodious song Bhuvanam Gaganam from the Puneeth Rajkumar film, Vamsi. The result was a golden buzzer.

Best friends with her father and mother, Nayana Nagaraj and her father sang the peppy song Malnad Adike from the film Simhadriya Simha. Nayana’s parents later performed in a romantic dance performance after getting the golden buzzer.

Little Gnana and her ‘pappa’ Gururaj sang the heart-warming song Ninnantha Appa Illa from the film Devatha Manushya. What do you think the result of this highly adorable performance was? A golden buzzer of course!

From the film Prema Loka, Rohan and his father, Sunil Babu’s performance on the song Banni Nanna Geleyare was absolutely golden-buzzer worthy. Later, his father danced romantically as a college student with his mother turning the audiences’ hearts into mush.

Shreyas’s older brother Suhas and he sang exceptionally well on the title track of Nodi Swamy Navirodu Hige and received much appreciation for their camaraderie. A golden buzzer soon followed after their performance.

The lovely song Ambaraveri Ambaraveri was sung by Omkar and his father from the film Rasika. Their chemistry in the song shined brightly, enough for the Mahaguru to hit the golden buzzer.

Sangeetha and her older sister Sahana sang the song Thabbalige Ee Thabbaliya from the film Karpoorada Gombe. Guess what? Her ‘kaka’ (chikappa) came to give her a surprise and little Sangeetha was super thrilled.

Sunadh and his mother’s performance on the popular devotional song Amma Naanu Devarane earned them a deserving golden buzzer in the end.

Parnika and her mother Pushpa looked lovely in their matching coloured outfits as they sang the song Devaru Bareda Katheyalli from the film Neelekantha. Not only did Parnika get a golden buzzer after this, her grandparents decided to surprise her too.

With a dramatic approach, Aprameya and his father Guruprasad enacted the song Yaaru Thiliyaaru Ninna from the film Babhruvaahana. Their effort was commended by the judges and Mahaguru and they both got a golden buzzer for their performance.

Despite their best efforts while performing on the song Ramana Avatara from the yester-year film Bhookailasa, the father-son duo scored 92.6/100 but was given immense praises by everyone.

Let us know which was your favourite performance on the last week’s episode, in the comments box given below.

The Comedy Thriller Raambo 2 Is Based On A 'One-Day-Date Combined On A Road Trip. Watch This Sharan And Ashika Rangnath Starrer Streaming Now On ZEE5

5 Reasons Why We Already Love The Newest Show On Zee Kannada, Radha Kalyana

NEW Love Story: Jothe Jotheyalli Is About Aryavardhan And Anu Who Have A 25-Year Age Gap!