Yet Another Entertaining Episode Of Genes With Akhilandeshwari And Parvathi Of Paaru!

Paaru and Akhilandeshwari from Paaru grace the show and Vijay Raghavendra- Greeshma talk about their new film Malgudi Days. All details inside. 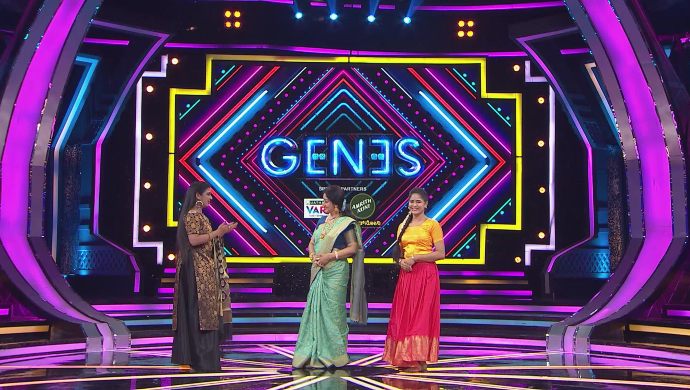 In the previous episode of Genes, Sushma welcomed Vasishta N. Simha and Manvitha Harish, as her guests for the evening, whose next film India Vs. England will be in theatres very soon. The other episode of the weekend was filled with excitement with the three sisters from Gattimela-Adithi, Aarthi, and Anjali, and we can assure you that this episode is a must-watch.

Sushma Rao is back and looked drop-dead gorgeous in this episode. We can barely take our eyes off her!

This episode welcomed Akhilandeshwari and Parvathi from the outstanding serial Paaru and we must say the two have been an absolute treat to watch.

With three sets of parents on one side and five children on the other, this cute duo was made to guess which child belonged to which set of parents. Well, we must say that Akhilandeshwari had an eye for this particular round.

Well, as warm a character as she is on-screen, Paaru is equally friendly and welcoming off-screen. Here’s a picture of her having a fun time with the children and they just can’t get enough of her.

The next episode witnessed the stars of Malgudi Days- Vijay Raghavendra and Greeshma Shridhar.

Cuteness alert! Vijay Raghavendra tries to guess the parents of these oh-so-adorable kids and we must say he won this round and the hearts of the audience, too!

The show also witnessed a very personal and emotional moment between Vijay Raghavendra and his sister Veena and we must say they are the cutest sibling duo ever. Agreed?

A scene involved the actors and the host reminiscing about a few moments from the past where Vijay Raghavendra also shared some childhood memories and anecdotes.