Baby YR was born on 2 Dec 2018. On 23 June 2019, after months of brainstorming and asking fans, the little angel finally has a NAME. Deets inside! 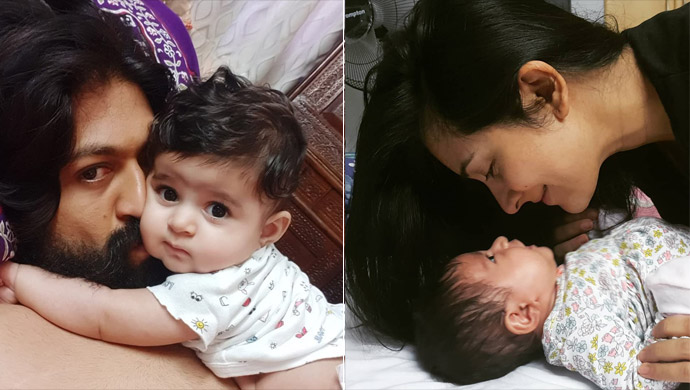 From becoming friends to falling in love and now being considered as a power couple in Sandalwood, superstars Radhika Pandith and her hubby, the Rocking Star Yash, have proved time and again that true love exists. On 9th Dec 2016, they tied the knot and have grown fond of each other with each passing day, since then. When the news of their angel coming into the world was announced to fans two years later in 2018, they received the news with much happiness. However, since 2nd Dec 2018, i.e, when they welcomed their daughter into the world, both Radhika and Yash were at an impasse for naming her.

So they asked all fans to help them out, and six months since then on 23rd June 2018, they finally settled on the name Ayra Yash. The little munchkin’s name means ‘Respect’, and the couple even released a naming video.

So without further ado, let’s look at the social media gallery of Baby Ayra Yash, shall we?

Check out their baby-name-reveal video here:

A father daughter relationship is a priceless one!! I know all of u are waiting to see our lil angel, won't disappoint u. This May 7th on Akshaya Tritiya.. we will reveal our true treasure.. our precious Asset 😊 #radhikapandit #nimmaRP

Our baby YR turns 6 months today.. she is half way to turning one!! Time flies for sure. Here is a tiny glimpse of her on this special day! 😊 Of course this video was shot when she was 3months old. She is our blessing, our angel ♥️ #radhikapandit #nimmaRP P.S : thank you Saniya for styling her and Bhuvan n Manish for capturing !

The day she was born, I was born too.. as a Mother 😊 #radhikapandit #nimmaRP

I know these tiny hands are wrapped around her first and forever Superhero, the one who will never ever let her down ♥️ Happy Father's Day to all the amazing Superheroes out there!! 😊 #radhikapandit #nimmaRP

The two actors first met while shooting for the TV show Nandagokul and then went on to make their debut in Sandalwood in the film Moggina Manasu, directed by Shashank in the year 2008. Since then there was no looking back for the Rocking Star and his beautiful wife Radhika. And today, they are proud parents to the adorable angel Ayra. Lucky parents or lucky baby?

Send in your best wishes to the lovely couple and their reason for happiness, Ayra, in the space provided below.

Watch Radhika Pandith in Doddmane Hudga, if you are a fan of the actress, only on ZEE5.

Keeping The Yash-Mode On By Watching His Hit Film Rajadhani, Streaming For Your Entertainment Pleasure On ZEE5

EXCLUSIVE: Radha And Krishna From The New Show Radha Kalyana Reveal About Their Characters