Once Muttu leaves Neelambari's room, she reveals to Maya that she was acting to be ill all along. 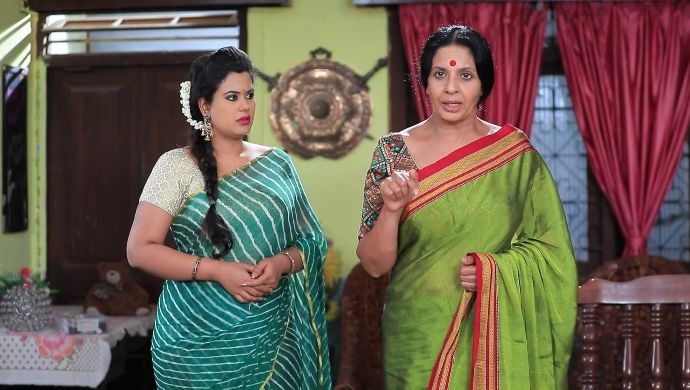 In the earlier episode of Yaare Nee Mohini, Muttu tells Aishu and Shanmugam that he came to the temple so that he would be able to make a sound decision about whom he must marry and wanted some guidance from God. He also expresses his love for Belli and the two get married.

This week, Aishu expresses her concern with regard to Belli and Muttu getting married. She tells him that Belli is struggling to hide the fact that she has gotten married to him and deserves all the respect as the new member of the family.

The next day, Muttu tells his Neelambari that Belli and he have gotten married in the temple. He also tells her that he is in love with her and does not have the power to be apart from her which is why he decided to tie the knot with her.

Neelambari falls ill again. The next day, he asks Maya how Neelambari is and tells her that he will personally check on her now onwards.

A few days later, everyone waits for Muttu to make his decision about his marriage. Muttu says that Aishu and Gautam will get married the same day as Muttu and Maya. Muttu thinks to himself that he will find a way to get out of this situation and only agrees to get married to her because of Neelambari’s health.

Neelambari speaks for the first time after her attack. She blesses them and tells them that they are doing the right thing by getting married. Muttu is happy to see Neelambari recover. As soon as he leaves, it is discovered that Neelambari was only pretending to be ill so that Muttu and Maya get married.

A few days have passed and Maya is taking care of all the preparations for the wedding. When she calls Belli to give her a saree, the latter finds herself in a fix as she is wearing the nuptial chain. Maya also tells her that she must wear the saree that has been given to her on the day Muttu and her get married.