Maya questions the character of Belli's parents just to instigate her. Belli gets furious and the two fight 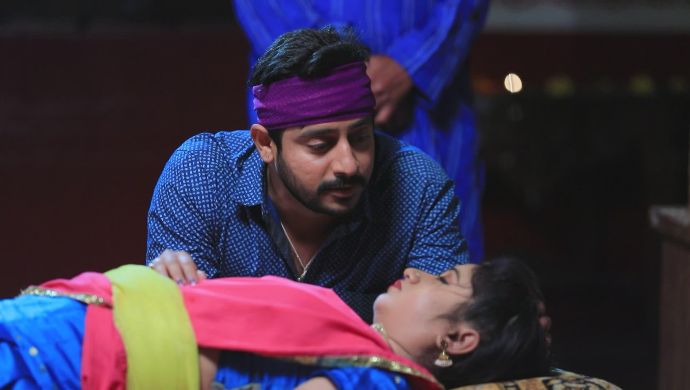 Earlier in Yaare Nee Mohini, Maya takes Muttu out for lunch but mixes his food with some kind of drug. Muttu, immediately, loses conscience and falls. Maya takes him back to their house and tries to get intimate with him in his inebriated state. Just then, Muttu reacts to a certain ritual that is being performed by the priestess. Muttu discovers what Maya has done and slaps her.

Shanmugam is getting ready to leave the house. Muttu apologises and begins to cry. He tells him that the two have been friends since childhood and if they fight, it doesn’t mean he leaves everything behind and also tells him that he will not be able to live without him. Belli, too, tries to convince him to stay back. Shanmugam doesn’t utter a word

After a lot of convincing, Shanmugam decides to stay back. Everyone shares a happy moment

Later, there is a discussing regarding Aishu’s wedding. As it is Ajji’s last wish, the family decides to get her married earlier than planned. Maya, excitedly, tells the family that along with Aishu, Muttu and herself should get married, too

However, Maya’s friend realises that the woman who is pretending to be Gautam’s ajji is actually an actress of a television serial. Maya realises that everyone has put up an act so that Muttu can get married to Belli instead of her

Maya calls Belli and begins to insult her family and her. She tells her that in spite of her telling Belli not to be in contact with Muttu, she is always at his service. She questions her character by asking her if she is trying to get close to Muttu to get money out of him. Belli gets furious and begins to choke her

Meanwhile, ajji pretends to get heartache. She tells the family that Aishu and Gautam must get married as soon as possible before she dies

Later that night, Maya and Muttu have gone out. Maya pays a few men to kill Belli. When they attempt to kill her, Muttu tries to save her and gets hit instead. Maya pretends to be attacked by the men. Belli is severely hurt

Muttu saves Belli and she survives the injury. Infuriated that her plan has failed, Maya visits the tantric again. He tells her to believe in him to get her married to Muttu

Catch all the episodes of Yaare Nee Mohini exclusively on ZEE5!

Over 94,000 stranded residents of J-K evacuated till date amid coronavirus crisis