Yaare Nee Mohini Weekly Recap Of 16-22 October 2019: Swathi Is In Danger, Thanks To Maya

Last week, it doesn't take Maya long to find out that Chitra is behind all the problems she is facing lately. She uses evil magic to tame Swathi! 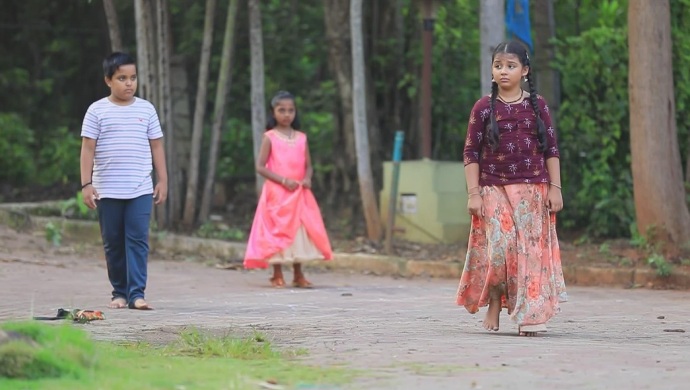 Previously on Yaare Nee Mohini, despite many efforts from Neelambari and Sharmila to ensure that Belli doesn’t go to meet Muthu away from home, Shanmugha takes her anyway. However, Muthu and Belli’s romantic bubble is burst when Neelambari arrives at the temple they are in. When she screams at Belli, Muthu cannot handle it and intervenes when Neelambari once again uses her emotional blackmail to make her step-son obey her every command.

Then, she does the unthinkable and gives poison to Belli indirectly. Muthu, who doesn’t understand what happened, fights for Belli’s life by doing a series of rituals at the temple as directed by the priest. Luckily, Belli is saved. Meanwhile, Maya is tricked by Shanmugha, who fakes Belli’s death just to give the former a few moments of happiness.

When she learns the truth and fights with him however, he challenges her that he will ensure that Muthu and Belli will get married in the end. Soon, the photographer arrives to take pictures of the to-be couples. Despite Muthu showing no interest in getting clicked with Maya, when he stands next to her, Shanmugha ensures that the photographer takes bad pictures of both of them. In the end, the photographer himself praises Belli and Muthu as a couple causing Neelambari to get furious.

Time to see what happened after that…

1. To get back at Belli, Maya makes her friend steal the anklets that Muthu had himself tied to her

2. When Belli finds out later she is devastated

3. She soon decides to go to the temple to find it but Muthu informs her that it is late and that they can look for it together

4. As he is removing the other anklet on the pretext that it is inauspicious, Maya comes there and throws a taunt at their romance

5. A wild Muthu, asks Maya to lower her voice before everyone wakes and walks away from her in disgust

6. The next day, Maya makes Belli run around to look for the anklet in all the wrong places despite Aishu telling the latter that all this is just to trouble her

7. Chitra, who watches this, enters the body of the house-maid and correctly places the anklet next where Maya sends Belli assuming she obviously won’t find it aka under Chitra’s photo

8. Much to Belli’s relief, she finds the anklet under her Chitra’s photo and wipes away all her tears in delight

9. While Maya seethes in anger and is disbelief about how this could be possible, Aishu reminds her that this can only mean that Muthu’s love for Belli is real, unlike her fake love

10. Soon, Maya faces another problem as her photo doesn’t appear next to Muthu on the wedding card

11. She, Rasika Devi and Sharmila catch hold of the occultist who reveals that now Chitra will not just grow powerful every Amavasya but will also be at full strength on every Friday

12. Still, in disbelief, Maya takes all of them to the printers and sees for herself

13. The results are shocking causing Maya to try waiting the whole night get a print the next day and she realises that the occultist is right

14. She then goes home confidently and has a face-off with Shanmugha who still claims that no matter what Belli only will get married to Muthu

15. To this Maya throws an open challenge that by the tomorrow’s end, Swathi will call her Chikkamma instead of Belli

16. The next afternoon, a fortune-teller meets Muthu telling him those grave things are about to happen and he should be forewarned

17. During this time, thanks to the occultist, Maya comes up with a plan to magically bring Swathi to her side

18. As a result, Swathi ends up accidentally falling on the doll that was just under the occultist’s control

19. Maya rejoices in the end when the occultist confirms that thanks to the power in the doll, now onwards Swathi will do exactly what the doll says

Will Swathi actually call Maya Chikkamma? How will Muthu save his loved ones? Stay tuned to next week’s update to find out.

Health Special: 4 Unique Health-Friendly Drinks On Oggarane Dabbi That You…

The Mid-Week Playlist Of Your Favourite Romantic Kannada Songs Is Ready. Are…

Watch The Latest Episodes Of The No 1 Show In Karnataka, Jothe Jotheyali, Now Streaming In HD On Your ZEE5 Platform