What Is The Significance Of The Kashi Yaathre In A Kannadathi Wedding? Find Out Here

Learn all about Kashi Yathre, a wedding ceremony that was shown in Gattimela, that's celebrated in Karnataka, Andhra Pradesh and Tamil Nadu. 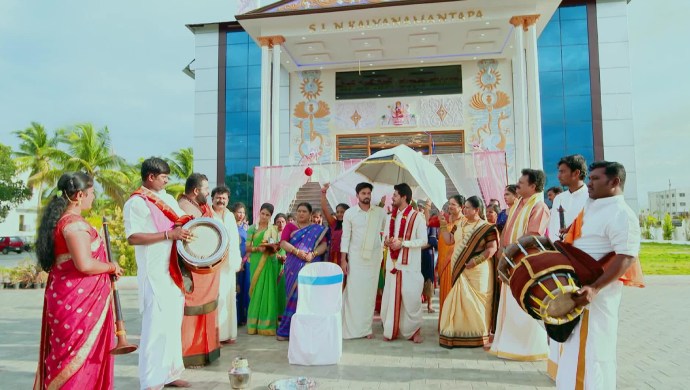 The hit show Gattimela has taught us many things about a Kannadathi wedding including how the whole procedure takes place. If you are a Kannadathi by heart then hang on because today we bring in more exciting information from Aarthi’s wedding. Yesterday on the show, Gautham participated in a ritual known as the Kashi Yaathre. This ritual is popular in three of the four Southern states; Karnataka, Andhra Pradesh and Tamil Nadu. While there may be variations in each caste and sect of these states, the main aim is basically this, the groom rethinks his decision of marriage and attempts to make a journey to the land of Kashi to attain lifelong celibacy. However, the bride’s brother should prevent the groom from doing so. Ideally, in the olden days, the father of the bride would take up this task. But since it’s the time of the millennials the rituals is tweaked by many families.

Earlier, weddings in Karnataka were simple affairs, that focused mainly on traditional rituals. Even now, many families prefer to adhere to the old-age customs that were set in our heritage. While these customs may vary slightly in different regions, the basic idea of a wedding remains the same. Now let’s dig deeper into what the Kashi Yaathre ritual is all about. So as you must know that Kashi is a religious place and in the ancient times, it was a place where students from far-off lands came to obtain higher education as well as for a spiritual transformation. Even to this date, people from all parts of the country travel to Kashi to gain such wisdom.

So at a wedding, it is part of the tradition for the groom to perform a ceremony where he is experiencing pre-wedding jitters and decides to go on a Yaathre to Kashi. Before he decides to go on the path of celibacy, it is the duty of the bride’s brothers, uncles or father to stop the groom from doing so. They have to use words of kindness and love to ensure that the groom doesn’t stray off from the path of marriage. On the show Gattimela, it was Sarthak who took up this role to convince Gautham to stay back and not begin this journey to Kashi.

Followed by this, the parents of the bride show appreciation to the groom for his decision by washing his feet and decorating it with turmeric and vermillion. And then the wedding begins!

For more exciting topics about a wedding, stay tuned. Did we miss out on any piece of information? Let us know what you know in the comments space given below.

Watch the film, Maduve Mane, if you like weddings, now streaming for free on your ZEE5.

Nirup Bhandari And Avantika Shetty Have Proved Their Talent In The Hit Film Rajaratha. Click Here To Get Started On More Entertainment, Only On The ZEE5 Platform

Radha Kalyana EXCLUSIVE: 13 Unseen Pics That Indicate Radha Is In Trouble Thanks To Krish