Weekend With Ramesh 22-23 June Recap: Vaijanath Biradar And Chikkanna Made It A Comedy Spl

Both the comedians come from humble backgrounds. The episode saw their journey unfold on the red seat of Weekend With Ramesh Season 4. 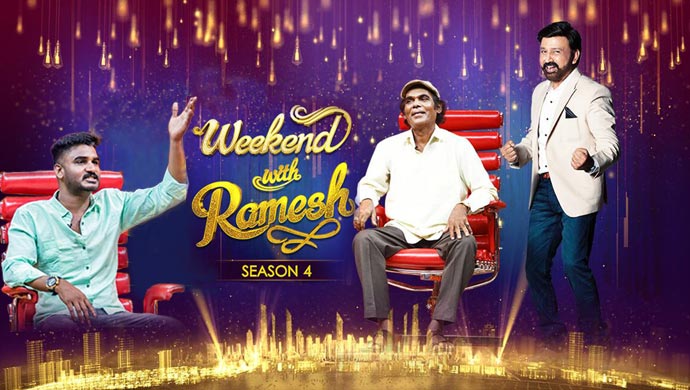 Many stars and real-life achievers have graced the show Weekend With Ramesh with their presence on the red seat. Furthermore, host Ramesh Aravind has kept fans of every celebrity hooked on to the show from start to finish. The fourth season of Weekend With Ramesh is no different. With personalities like Padma Vibhushan Narayana Murthy, Sumalatha Ambareesh, Padma Bhushan Veerendra Heggade and Prakash Belawadi, who sat on the red seat and spoke at length about their whole life until this moment, the season has probably been the best of all and rightfully so.

Last week was special because it was a ROFL-worthy weekend special. What I mean is that not one, but two actors known for giving fans some hilarious moments onscreen, were the guests. The first guest was the veteran theatre personality, who is also a comedian and has acted in over 350 films in his career-span, Vaijanath Biradar. Before we recap his episode, I would just like to point out that the senior actor was a complete ‘sport’ during his entire time on the red seat. Whatever was asked of him (performing or revealing memories), he did with ease and a keen interest to share information with fans. Ramesh Aravind’s introduction for Mr Biradar was so powerful that it might just send goosebumps down your spine, in a sense of pride of course. Take a look…

With a passion for folk theatre and arts, Vaijanath Biradar started off by telling fans about his favourite childhood games and played a couple of rounds with the host too. The way the esteemed guest explained the games was so adorable, it felt like he was a kid again. However, the star became emotional when he revisited his village and some memories from his family through the ‘Weekend Tent’. Soon, more family members came to the show and the guest received them with warm embraces and kind words.

When it came to pursuing what he loved most, acting, Vaijanath Biradar came down to Bangalore back then and shared his experience with fans for the first time. Check out this video, where he revealed what happened when he first stepped in Bengaluru.

Once, he started acting in small roles, he got the opportunity to meet the legend Ananth Nag for the first time. Here’s what he had to say about meeting one of his idols…

The next guest on the show was the famous comedian Chikkanna, from the Raambo 2 and Natasaarvabhowma fame. Coming from a humble background, Chikkanna spoke about how he went from nothing to a known name today. There were a lot of emotional moments because of the struggle he faced in the formative years along with some hilarious moments with his school-mates too. The comedian is the fifth child and the only son amongst six children.

While he may have been one of the youngest, but on the show, his sisters confessed that he never let them feel the presence of a father. He took on all their problems and never complained even once. His mother too expressed that after years of prayers when a son was finally born to her, how happy she was. Many more exclusive moments were shared on the ‘Weekend Tent’ which brought about many new faces of the comedian, Chikkanna. Take a look at the most loved social media clips of the comedian on Weekend With Ramesh.

The episode in a gist:

Learn about Chikkanna’s past professions here…

Did you watch the Chikkanna and Vaijanath Biradar special of last week? Let us know which fact about each of them was the most surprising in the space given below.

Watch Chikkanna in the Sharan and Ashika Rangnath starrer Raambo 2, on ZEE5 if you are a fan.

If You Want To Watch The Comedian Chikkanna's Episode Special On Weekend With Ramesh Season 4 On ZEE5, All You Have To Do Is Click Here

EXCLUSIVE: Radha And Krishna From The New Show Radha Kalyana Reveal About Their Characters