While one has always dwelled in comedy, the other is known by his fans as a rugged villain. But what happens when they switch? Let’s find out! 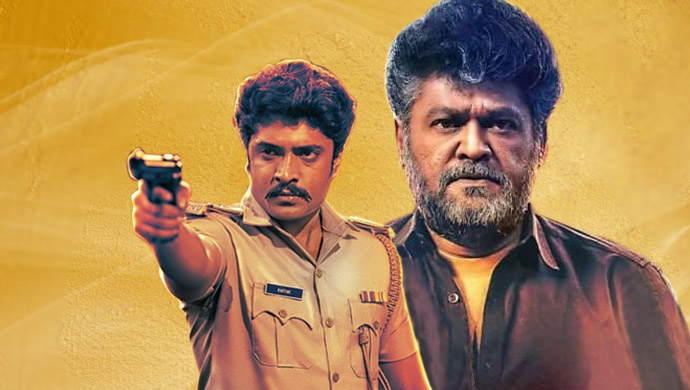 This brilliantly crafted crime-thriller by the debutant director Harikrishna brings with it a promise to keep you thoroughly entertained. This is because he has done an exceptional job sketching the character profiles of both the lead actors, Namma Navrasa Nayaka Jaggesh and Vasishta Simha. The former who is famously known for his comedy roles was made the villain in this film while the latter who almost always plays a rowdy in his films, was roped in to be the hero.

During the audio release of the film, Jaggesh lauded Harikrishna to help bring out a new version of him as opposed to the typical comedy roles he plays. “He made me a real star…Nannanna real actor madidu,” Jaggesh said, pointing towards the director. The 8MM Bullet actor even explained that his ‘salt and pepper’ look gave him a fresh perspective about the different things he can try out there.

The veteran’s makeup man, Madhegowda, with whom the star has worked for over 35 years is the reason why Jaggesh looked like an apt baddie. In another interview, the actor was asked about his what the fans can expect from the film and he replied by saying, “A normal person, when provoked by his family and friends and let him down is propelled to take a wrong path. He becomes a serial killer. Money plays a crucial part in this thriller.”

Another noteworthy performance was that of Vasishta Simha, the hero of 8MM Bullet. With his typical villain roles in movies like Mufti and KGF: Chapter 1, it was a surprise when he played the protagonist in this Harikrishna film. His police officer role has paved way for fans to see more than just a brute in him. And the results are superfine. Although Jaggesh proves to be the one-man-show in the whole movie, Vasishta’s brilliant performance cannot be ignored.

Who’s reversed role did you like more? We can’t wait for your comments in the space below.

To check Vasishta’s baddie side, watch the film Mufti streaming on ZEE5 now.

Doddmane Hudga Is A Family Drama That Will Keep You Entertained From Start To Finish! Watch It With Your Loved Ones Now

OMG: Here's How Kamali Actor Niranjan Looked Like Before He Got The Role Of Rishi