After much deliberation, it is concluded that they look more like sisters than mother-daughter. Of course, you will be the best judge of that. 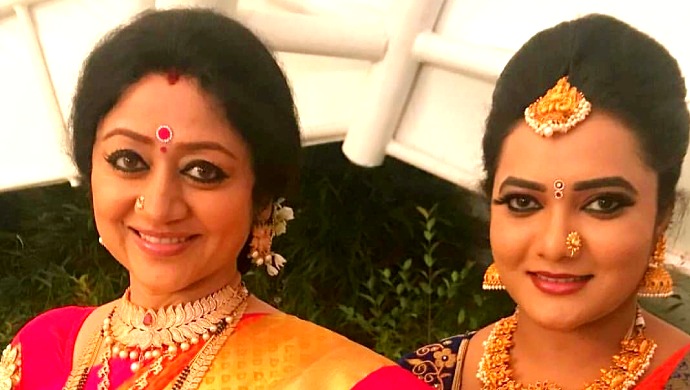 The increasingly popular show Paaru has brought out a new cast including the actress Vinaya Prasad as one of the main leads. Playing the role of the legendary icon Arasane Koteya Akhilandeshwari, Vinaya has done a great job in keeping up the image of her character.

Something extremely interesting caught our eye about Vinaya, recently. We have managed to spot her real-life daughter. Want to take a wild guess who it could be? It is none other than Namma Janaki from the show Bramhagantu. That’s right! Prathama Prasad is the prodigy of her extremely talented mother, Vinaya Prasad. Their striking resemblance is uncanny, take a look…

For every child, their mother’s influence and morals shape their future. In Prathama’s case, with such a brilliantly talented and gorgeous mother, it is no surprise that she turned out quite successful in her career. Vinaya Prasad, on the other hand, looks more like Prathama’s sister than her mom. Wouldn’t you agree?

A post shared by PrathamaPrasadofficial (@prathamaprasad) on May 12, 2018 at 9:53pm PDT

Also, Vinaya and Prathama try to spend every possible moment together, given their busy schedules.

It is a brand new year…stepping into it with millions of dreams + the confidence to make them come true…Wishing my dear insta family a gorgeous year ahead..Happy New Year…❤❤❤🌻🌻🌻

A post shared by PrathamaPrasadofficial (@prathamaprasad) on Dec 31, 2018 at 7:26pm PST

Their treasured moments are heart-warming. The adorable duo never misses an opportunity to get clicked together.

Happiness at its prime

A post shared by PrathamaPrasadofficial (@prathamaprasad) on Jun 4, 2018 at 6:34am PDT

The only thing clearly visible in these pictures of Prathama and Vinaya is the love and respect they share for each other. As an actor, it is a blessing if a parent or a relative is already part of the entertainment industry. Not necessarily for personal benefit, but to have technical know-how of the way the industry functions. For Prathama, her veteran mother is her guardian angel of course in this matter. While they work for different shows on Zee Kannada, we would love to see more pictures of them together. Only because they always emit positive energy when they are with each other.

Let us know if you too were emotional looking at these two gorgeous actresses, in the space given below.

Stream your favourite Kannada movies and shows on ZEE5, and fill your weekend with entertainment.