Meera and Jhende of Jothey Jotheyali along with Chiranjeevi Sarja and Tanya Hope, will entertain you with their madness this weekend! 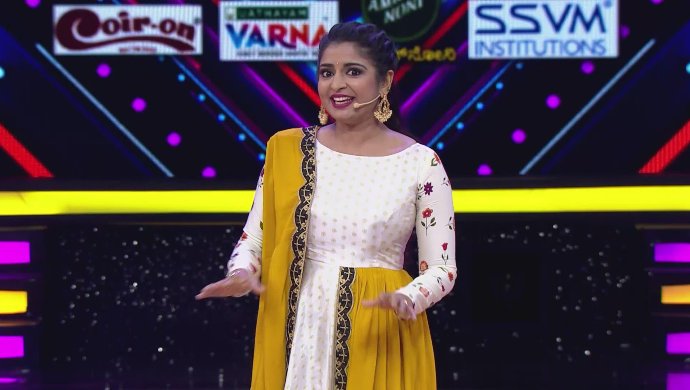 The previous episode of Genes saw the on-screen brothers of Paaru-Adi and Preethu-opening the show, as well as being extremely sporty about the game. The two not only entertained the audience with their stories about Paaru and all the fun they have while shooting, but also put up a tough game for one and other.

The very gorgeous Sushma Rao, also the host of Genes, welcomes the audience for taking part in this very intriguing show, Genes.

Meera and Keshav Jhende of Jothe Jotheyali are introduced as the guests for the evening. The three talk a little about the show, where Sushma asks them about their roles in the serial, and how they play a negative role in Anu’s life.

The first round they play requires them to choose two parents, who are put before them, and guess their respective children out of the five kids that have been made to stand alongside. In this round, Jhende wins. Meera wins the celebrity round, of guessing which of the following women, is the daughter of Surendra Shetty (Shilpa Shetty’s father) without revealing his personality.

Jhende is shown the picture of his father, after which, he shares a very heartwarming story about his father passed away. This story gets everyone teary-eyed.

The next episode welcomes the very dashing Chiranjeevi Sarja and new-age actress Tanya Hope, who have come to promote their new film Khakii. The actors talk the same, in detail.

Chiranjeevi shares some fun moments with the little kids on the stage and ask them questions about their parents. His absolutely humble and charming personality, cannot be ignored here!

Sushma Rao also plays a game with Chiranjeevi, which involves her tying his eyes and asking him if he can picture Meghana Raj, whom he recently got married to. The host also calls Meghana on the phone and asks the two about their future plans.

The show also witnessed Khakii’s movie director Naveen Reddy, to wraps up the night by talking a little bit about his new film.

Birthday Special: 7 Things You Did Not Know About Birthday Queen Malavika Avinash