Think Your Mother-In-Law Is Demanding? Wait Till You Learn Of Tara and Suhasini’s Demands

Be it Suhasini from Gattimela, Tara from Kamali or even Akhilandeshwari from Paaru, their demands as onscreen mother-in-laws are next level regressive 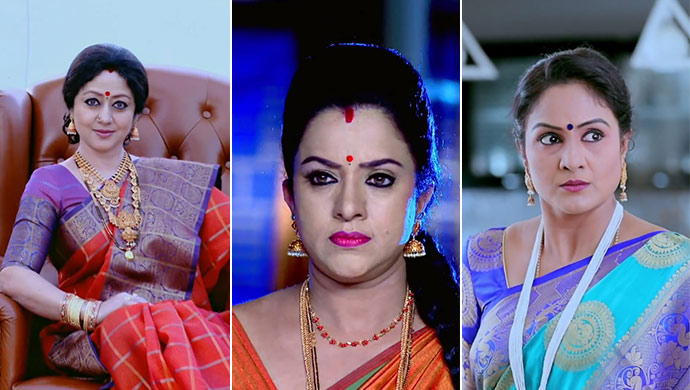 Despite the advancing technologies and rapid changes we are surrounded by, there are still some age-old customs that many individuals like to follow. It could be marrying one’s children into the same religion or caste to not eating non-veg on a particular day of the week, we all have our ghosts hidden in the closet. Recently on the show Gattimela, one such thing happened. In fact, even on other Zee Kannada shows like Kamali and Paaru, this pattern of behaviour was spotted. I am talking about none other than the onscreen mothers-in-law if these TV serials.

Today, we had a peculiar thought to share with you’ll; DEMANDING Mothers-In-Law (MILs)! Suhasini, Tara and Akhilandeshwari from the show Gattimela, Kamali and Paaru have time and again shown that they aren’t just going to settle for any random woman as their daughter-in-law. Their demands are very specific and that is precisely what we will dwell on right now.

Recently, Suhasini made an unreasonable demand from Parimala, after Aarthi and Vicky’s secret love affair was revealed. Her condition was that only if Pari came to her, apologised and touched her feet, would she agree to her son’s love affair. Suhasini had nothing but revenge in her mind for what Amulya did to her when she slapped Parimala. Unfortunately for Pari and Ammu, they had to go through it for Aarthi’s happiness.

Tara’s demand was to Annapoorna and here’s another specific one. Since the Nandas and Mahajans are extremely rich business families, Tara’s only aim was to strengthen this partnership/relationship through marriage. So much before Kamali was in the picture, Tara had already promised Annapoorna that her younger son Rishi, will marry whoever turns out to be the latter’s older granddaughter (Chandru’s first child). So when she found out that it was Kamali who is the remaining Mahajan of Annapoorna’s family, she expected her to learn the ways of the rich people. Which in my opinion, should be a choice for that particular individual.

Finally, she is the most distinctive demanding MIL. Known popularly as Arasane Koteya Akhilandeshwari, Akhila’s expectation from her daughter-in-law is that she should not only be rich but be kind-hearted and a righteous individual. While she still doesn’t know what is going on between Paaru and Adi, it is very interesting to think about what will happen when she finds out she already has a daughter-in-law and while she is awesome, she belongs to a lower-class family. I hope you know that the person I mentioned is Paaru.

In my opinion, Suhasini’s demand was the most illogical because come on, this is the 21st century. It is absolutely irrational to ask a lady who is probably older than you to touch your feet because you come from a higher financial background. In a time where sharing, caring and spreading love is imperative, we cannot afford to go back as opposed to forward. Every human should be respected regardless of whether they are rich, poor, old or young. Don’t be like Suhasini, just spread love and it will come back tenfold!

Who in your opinion is an irrational mother-in-law? Let us know in the comments box given below.

If Mythological-Fiction Dramas Appease You, Nagarahavu Is Your Go-To Film This Weekend, Streaming For Free Here On ZEE5