The ‘Property Round’ On Dance Karnataka Dance Family War 2 Gave Entry To A SPECIAL JODI!

Last week in the 'Property Round', judge Arjun Janya couldn't make it due to personal reasons, but this cute jodi came as a special surprise! 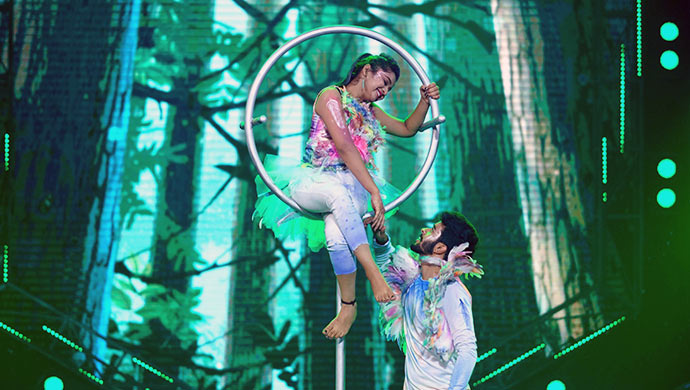 Giving the audience some quality entertainment is the hit dance show of Karnataka, i.e, Dance Karnataka Dance Family War 2. The best part about this reality show is that it brings together your favourite actors from the Zee Kannada roster to participate in pairs (from the same show or different), in a dance battle. You must have already seen the ‘Duet Round‘, the ‘Mass Round‘, the ‘Story Round and the ‘Dance As You Wish Round’ that have gone by with a few glitches (like Subbu from Bramhagantu getting injured, Nanditha from Jodi Hakki and Barkath Ali from Comedy Khiladigalu falling ill), but as they say, ‘the show must go on‘.

Last week on DKD FW2, it was the ‘Property Round’ and guess who is the special jodi for the show? It’s none other than the tiny tots, Gnana and Alaap! We were super excited to see the little pair of special contestants, so here’s a recap of the last weekend’s episodes for you…

Unlike their usual performances, Suraj and Minchu danced on a romantic rendition of the song Akasha Neene and were received by a big hug by Anushree. Their property was a harness and thereby they staged an aerial act. Guess what? Their exceptionally sweet performances earned them a ‘Fire-Brand-Performance’ tag and got them the Golden Hats!

Using garage equipment as their property, the duo of Hanumantha and Shiny danced on the title song of the film Annabond and you can see the results above. Did you notice that for the first time ever, Namma Hanumanthu has come in front of the camera in a pant-shirt combination? Rakshitha Prem and Vijay Raghavendra praised the choreographer immediately before the two a total of 18.5/20.

A brilliant stage act by Anoop and Dimpanna, who wanted to pay tribute to our mother nation: India. Their selective mix of songs and use of a peculiar aerial prop made Rakshitha Prem emotional. Both the judges gave these two tiny tots a standing ovation for their performance. Not only this, Vijay sir and Anushree gave them the ‘Fire-Brand-Performance’ tag as well as the Golden Hats.

Soorya, who was injured last week, came back with full zeal after a week’s rest and performed with a rotating cylindrical metal object and the results of their act was amazing. They both danced to the tunes of the song Midiva Ninna from the Rocking Star Yash film Rajadhani and got 19/20 from the judges.

Just like Soorya-Hiranmayi, Prekshith and Anwisha too made use of metals objects but theirs was square in shape. However, despite their best efforts, their electronic-robotic act got Prekshith and Anwisha a total of 16/20 from Rakshitha Prem and Vijay Raghavendra. This is the first time these two puttanigalus have got anything less than a full score, so let’s hope this weekend they are back with a bang.

Unfortunately for Ningi, last weekend wasn’t very fruitful. Firstly, Barkath Ali, her partner wasn’t keeping well so he has to omit this round in order to take rest. Secondly, since this was technically a solo act, judge Rakshitha Prem said that Ningi (whose prop was a pillow) should have performed with double the enthusiasm. Her performance on the song Aalochane from the film Romeo earned her 15.5/20.

Yes! Finally, after three weeks of dancing solo since Subbu, Pranathi’s partner got injured in the first performance, Tejas from the show Kamali has entered the dance competition as her partner. Their romantic rendition to the song Matthe Maleyagide from the DBoss film Chakravarthy won the judges hearts immediately. The props given this duo was aerial hoops. The act was so good that when Vijay sir was asked to give his remarks, he directly went to give them the ‘Fire-Brand-Performance’ tag followed by the Golden Hats.

The littlest jodi of the show, Gnana and Alaap used chairs as their props and danced to the Kichcha Sudeep song Baite Baite from the film Varadhanayaka. The judges, the other participants and the audience’s hearts turned into mush after seeing these two cuties putting their best foot forward on the stage. Since they are the special contestants, they will not be scored on the show but let’s wait and watch for more fun and entertainment from these two.

As can be seen from the clip above, Preethu and Anika performed with a merry-go-round sort of an object as their props and on the song Swathi Muttina Male from the Crazy Star film Bannada Gejje. The performance was well-received by both the judges, who scored the duo 18.5/20.

Using an affixed rotating hoop as a prop, Adithi and Vicky from the hit show Gattimela, delivered their act with precision. Their dance was about a pair of love-birds! Adithi-Vicky danced to the tunes of singer Armaan Malik in the song Jaadu Maadidanthe from the film Siddhartha. The judges’ pair of Rakshitha Prem and Vijay Raghavendra scored them 18/20 for their act.

From the Zee Kannada show Aathma Bandhana, Ashok and Bhavani opted for the items that are used in a court of justice as their prop. For the act, they chose the song Birugali Yondige from the DBoss film Tarak. Bringing the emotional concept of a divorce were Ashok and Bhavani, who impressed the judges with the message they brought forth with their act. The performance was awarded 19.5/20 by the judges.

Dressed up like puppets, Lokesh and Manthana’s prop was the elastic band and their act was based on dolls or bombe. For their act, they performed on the song Aha! Bedaru Bombe from the film Gaalipata. However, despite their best efforts, the judges found something lacking in the performance and scored them 16/20.

Smile Performance of the week: Suraj and Minchu

Dazzling Performance of the week: Pranathi and Tejas

Jodi of the week: Ashok and Bhavani

Next week’s challenge: Vijay sir announced that next week, each contesting jodi has to recreate the ‘best onscreen couples’ of Sandalwood. Cool isn’t it?

Wish your favourite couple all the best in the comments box given below.

If You like Marriage-Oriented Films Watch The Shraddha Arya And Ganesh Starrer Maduve Mane, Streaming Here On Your ZEE5 Now