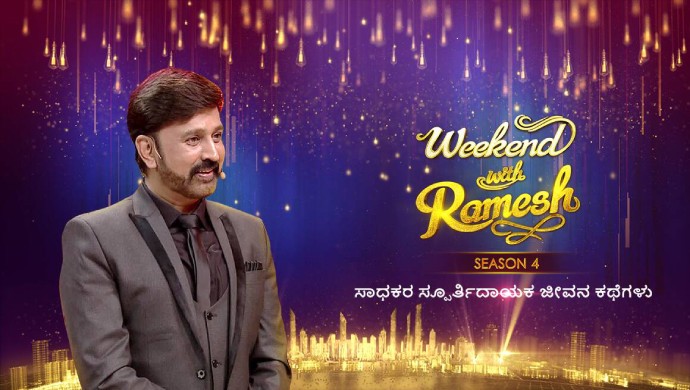 You must already be aware that Weekend With Ramesh is the most prominent chat show on Zee Kannada. A quick recap, the first guest was the 21st Dharmadhikari of the Dharmasthala Temple in Karnataka, Padma Vibhushan Veerendra Heggade. The second guest that was invited was none other than Dr Rajkumar’s middle-child, Raghavendra Rajkumar. For those of you who are new to the show, you should know that Weekend With Ramesh is more than just a host chatting with known celebrities. Unlike other chat shows, even real-life achievers who have contributed immensely to the betterment of the state, are invited to take the red-hot-seat! Apart from this, but the show also discusses in detail about family members, best friends and maybe even nostalgic memories of these guests.

After following the lives of Padma Vibhushan Veerendra Heggade and Raghavendra Rajkumar, the last weekend on the show saw not one but two guests namely, Veteran actress Prema and the talented Prakash Belawadi. You must know Prema from a variety of hit films she did in the yester-years. To name a few, A Aa E Ee, starring opposite the host Ramesh Aravind himself as well Nammoora Mandaara Hoove, opposite Shivanna.

On the Prema special episode, you will get to see some exclusive clips and will also get to meet her family members, including her favourite teachers. Let’s look at the best moments from that episode, shall we?

1. Her parents talking about how well she scored in school and college will make you ROFL

2. Prema’s brother opens up some long-hidden secrets about her

3. An old letter was written by Prema, surfaced in Ramesh’s hands. Any guesses whom she wrote it too?

4. Ramesh tries to dig up why Prema took a break at the peak of her career

The second guest on the show is none other than the actor, activist and theatre personality, Prakash Belawadi, who has worked in many hit Bollywood and Sandalwood films. A few movies would be Mufti (Kannada), Airlift (Hindi) and the latest release The Tashkent Files(Hindi). His best moments on Weekend With Ramesh were…

5. Prakash opens about the difficult relationship his family had with his father

6. Thanks to Ramesh, Prakash Belawadi can be seen blushing when his beloved wife walks down the stage

7. His friend Mukhyamantri Chandru reveals some hilarious secrets about Prakash

8. Prakash Belawadi is caught in an emotional moment while reading some lines in a book

Let us know about which episode you loved the best in the space provided below.

Watch Prakash Belawadi in the film Mufti, streaming for your entertainment pleasure on ZEE5.

Sa Re Ga Ma Pa Lil Champs Season 16 Had It's Second Elimination In The Neena Naana Round. To Find Out The Eliminated Puttanigalus Click Here