Hanumantha, Sunila and Keerthan Holla were some of the ex-participants who came to show their support to these puttanigalus! 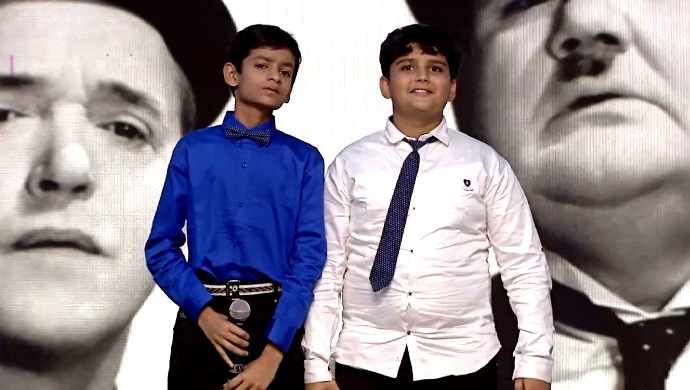 As said by the judge Vijay Prakash Sir in the previous episode, this week’s challenge was a duet round with previous participants and winners of Sa Re Ga Ma Pa. As usual, hostess Anushree was the highpoint in the episode because of how she encouraged each puttanigalu and made them laugh too.

While only a few of the contestants got the chance to perform with the ex-participants, let’s take a look at how the ‘Mahasanchike‘ went.

For her brilliant performance, the jury scored Sakshi, 92.6/100.

No need to guess this one because the Mahaguru promised her a golden buzzer after she dances for everyone and Parnika didn’t disappoint. The first contestant in this round to get a golden buzzer=100/100!!

With such an amazing combo of singers, there is no way that Gurukiran would have got anything less than 100 right? Well, it’s true. A standing ovation, as well as the golden buzzer, was his reward after performing so beautifully.

The audience was moved by Sangeetha’s performance along with Hanumantha. The jury scored her 94.6/100.

The judges termed these two boys as the ‘Laurel and Hardy’ of Sa Re Ga Ma Pa Lil Champs Season 16. While Sunadh was able to score 96.6/100 from the jury because of his upset throat, Rohan scored 97.3/100.

7. The smallest contestant on Sa Re Ga Ma Pa Lil Champs ever!

The tiny little girl Gnana, who knows over 25 songs by heart thanks to her parents, is a mere three and a half years old. Still, she always entices the audiences with her little gimmicks like her famous ‘Hiiiiiiiiii’. This adorable darling too got the golden buzzer from the Mahaguru, who absolutely adores her.

With scope for improvement in her voice, the jury scored Monamma 89.3/100.

These two performed on a duet song and won the hearts of the jury and judges alike. For this performance, Nayana scored 92.6/100.

Remember on the last episode, VP sir asked the makers of the show to make Appu sir listen to Rubina’s song? Well, he did and he loved every bit of it. What a humble man Namma Appu sir is. After their performance, Appu Sir and Rubina’s meeting was telecasted, so if you haven’t seen last week’s episode, now is your chance. As for the scores, Rubina got a 94.6/100 while Keerthi was at 90.6/100.

Both of these boys are splendid performers and made the judges happy with their voices. Abhisyanth was scored 94.6/100 for hir performance while Shreyas Kumar got the golden buzzer for the second consecutive week.

A power-packed performance by these two earned the quirky Aprameya 94/100.

To know about the best performances of the week, watch the full episode, now! Also, let us know in the space below, who won your heart in week 2.

All Appu Sir Fans, Gather Your Family This Weekend To Watch His Hit Film Doddmane Hudga Without Fail