Kannada movies like this are not only entertaining but educative as well. Questions #1 and #7 were on my mind too. 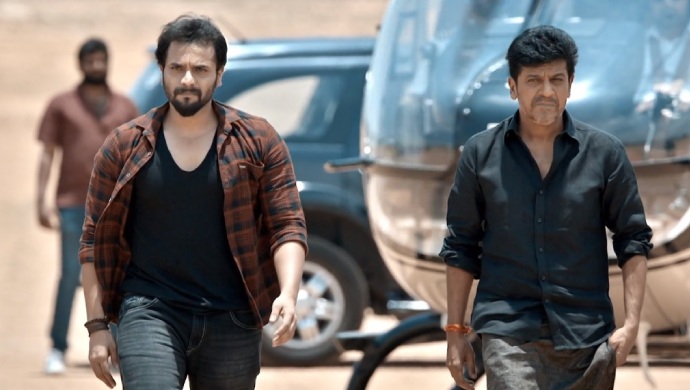 Every film that we watch leaves with us some memories or lessons as you may call it. Directed by the debutant Narthan M, Mufti is an action-thriller film that will leave you with more than one reasonable question in your mind. Gana (Sriimurali), who is a police officer, is sent on an undercover mission into the dangerous world of the most feared gangster, Bhairathi Ranagal (Shiva Rajkumar) of Ronapura. While he is sent to observe and record all the crime caused by Bhairathi, what happens in the end, will startle you. Shiva Rajkumar and Sriimurali were the perfect power-packed duo selected as the lead cast in this film.

Watch the Roaring Star and Karunada Chakravarthy in action here:

For those of you who are contemplating watching the film, these seven questions will motivate you further.

1. Why can’t there be more honest officers like Ganaa?

Ganaa is an honest and no-nonsense kind of police officer. Unlike many, who waste their time in corruption, he fights the wrongs and works towards making them right. We are in serious shortage of such police officers, don’t you think?

2. Are all gangsters ruthless?

When the system itself is out of place, what can we expect from its soldiers? Nothing. Bhairathi is one such character in the film who fights for injustice against the innocent. Despite being a feared underworld don, he punishes only those miscreants who easily get away with crimes.

3. Isn’t it risky for a cop to go on an undercover mission?

When police officers are sent on sting operations, their life is always at risk. Not only is there fear of blowing their cover, but they have the added pressure of collecting information about something or someone at any cost. While Ganaa ended up on the good side of Bhairathi, not many officers are so lucky.

4. Does evil rule this world?

The answer to this question is simply no. There are many individuals like Bhairathi, who genuinely give back to the needy. It is such a feeling of pride when you help the lower-income groups and get their heartfelt blessings in return. You might not see them many-a-times, but such people do exist.

5. Is the bond of a brother and sister breakable?

Even though Bhairathi’s sister refused to talk to him throughout, when she found out the truth, her heart was filled with love for her brother again. If your older brother is being protective, be rest-assured he has your best interests in mind. Whatever happens, remember that your tears are his worst enemy. If you too have an older brother, treasure your moments with him always.

It is a known fact that your actions are a reflection of your soul. For the same, a concept of Karma was created centuries ago to put human actions into two categories, good and bad. Take this film, for example, all the corrupted characters of the film found that Karma was waiting for them at the end. Don’t forget, Karma watches everything you do, everything!

7. Is too much greed good for any individual?

It might sound unlikely, but it is true. Greed for anything be it money, or any other worldly possession can turn out to be fatally harmful for you. As for this movie, all those who were overly greedy for power and money ended up paying for it with their life.

For those of you who haven’t watched Mufti yet, Shiva Rajkumar and Sriimurali totally do justice to their roles and you will be filled with ‘josh’ by the end.

What did you learn from this movie? Keep your comments flowing in the box below with #MuftiKannadaFilm #ILoveShivaRajkumar #ILoveSriimurali

Meanwhile watch other Kannada blockbusters like Milana, Huliraya only on ZEE5.

If You Haven't Had Your Fill Of Action-Thrillers, Watch Allu Arjun's Surya The Soldier Now