Meet the contestants who will take on each other with their melodious but powerful voices. Who do you think impressed the judges the most? 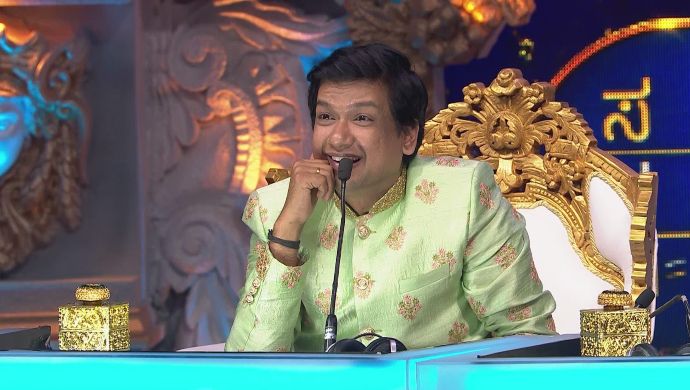 The popular singing show Sa Re Ga Ma Pa is back and how! Last year, Sa Re Ga Ma Pa Lil Champs Season 16 saw  Omkar Pattar as its winner with Gurukiran Hegde as the first runner-up and Sunad as the second runner-up. This weekend, in Sa Re Ga Ma Pa Season 17 the contestants were chosen after several rounds of auditions. We can already tell that it’s going to be a stiff competition. Here are a few of the contestants to watch out for.

The show kick-started with pretty hostess Anushree flashing her million-dollar smile and making a grand entry. We just couldn’t take our eyes off her. How can anyone look so beautiful?

Anushree explained the one very important rule wherein the judges blindfold themselves while the contestants audition.

The mega auditions began with Vishwatha who got much appreciation from all the judges. They also gave her green buzzer which was a symbol of acceptance. Everyone congratulated her as she was the first contestant to be chosen in the show.

Srinidhi was another contestant who won the hearts of all the judges and got all 4 green buzzers as they were highly impressed by his performance.

Age does not have any place when it comes to talent. And on this note, Appachi Anna’s performance brought a smile to our face. It was truly an unforgettable performance. His family was called upon stage and the judges shared a sentimental moment with them, too!

Talk about a power-pack performance from the contestant and no one better than Darshan, our contestant #7 who could beat anyone with his oh-so powerful and cheerful voice!

Young and pretty Asha Bhat won the maximum applause from the judges for her mellifluous voice. The judges loved her performance so much that they called her as one of the main reasons why a show like Sa Re Ga Ma Pa has touched the hearts of everyone in such less time.