Even though the movie focuses on the bond between a mother and her son, the Shashank directorial Thayige Thakka Maga is more to do with corruption. 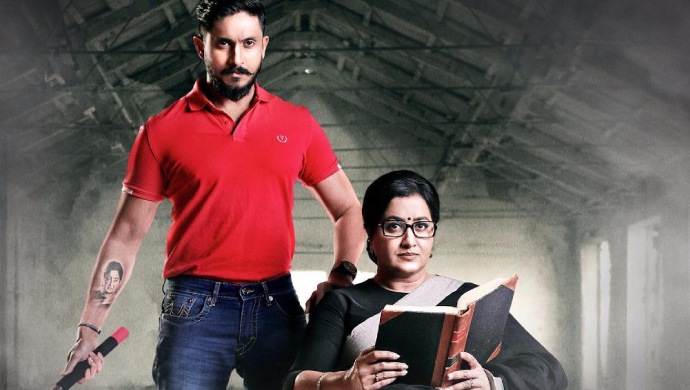 From the first scene in the film, it is proven that the Shashank directorial Thayige Thakka Maga is about a mother-son duo, who cannot stay quiet in the wake of injustice. Starring the late Rebel Star’s wife Sumalatha Ambareesh and the stud-like machismo Krishna Ajay Rao, the film is about crusade of Parvathi and her son Mohandas, who put their foot down when the judicial system ignores corruption on the grass-root level. It was refreshing to see Krishna in a complete makeover for the film.

Mohandas, with his rugged body and short-tempered persona, creates havoc in the lives of some corrupted minister and his son, for committing a heinous crime and trying to get away with it. His mother Parvathi, whom he adores and has made a tattoo of on his hand, is his life support so whatever he does is according to her wishes. “Nam Amma Kanoon Follow Maadtare, Nanu Nam Ammana Maatra Follow Maadthini’ is the famous dialogue that Mohandas tells one of the goons he is bashing, and rightfully so.

Except for maybe one-odd scene, the director stitched the story in such a way that Parvathi’s son is her shadow through and through the film. So much so that, she is the one who spots Saraswathi (Ashika Ranganath) at an event and finalises her as her sose! Luckily for her, Mohandas also falls for the same girl. ‘Like mother, like son’, I tell you. That is not all, the movie also sees the prominent supporting actor Achyuth Kumar as Saraswathi’s father as well as the famous comedian Sadhu Kokila, in a short role.

While initially, one may think that the film has nothing but violence, I recommend you watch the whole film to know the crux. As the director mentioned to a leading media daily, “The story is about you and me, a common man who faces problems because of the grey-areas of the government”. To support this, there are more than five instances in the film, that you will come across that will be totally relatable to many of you. So, on that note, Thayige Thakka Maga proved to be a sublime film and doesn’t have a lot of unnecessary scenes too.

Award-winning director Shashank, who was responsible for launching Rocking Star Yash and Radhika Pandith into the industry, has also done the screenplay and story. This coupled with Judah Sandhy’s music and all you need is your family gathered around you and some big buckets of popcorn, because Thayige Thakka Maga, is three hours of absolute entertainment and a brilliant end. Some may even say that the power-packed climax of the film was the best part because all is right with the world again!

Who else is watching this film as soon as possible? Let us know what your reason for watching Thayige Thakka Maga is, in the space given below.

To Catch The Latest Episodes Of The Prominent TV Show Paaru, All You Have To Do Is Click Here To Watch It On ZEE5 Now.