Subbalakshmi Samsara Weekly Recap Of 25-31 July 2019: Has Guru Turned Over A New Leaf?

Last week, Guru makes more than one effort to win over Subbalakshmi's heart. But with Shanaya's constant interference, will this feat be achievable? 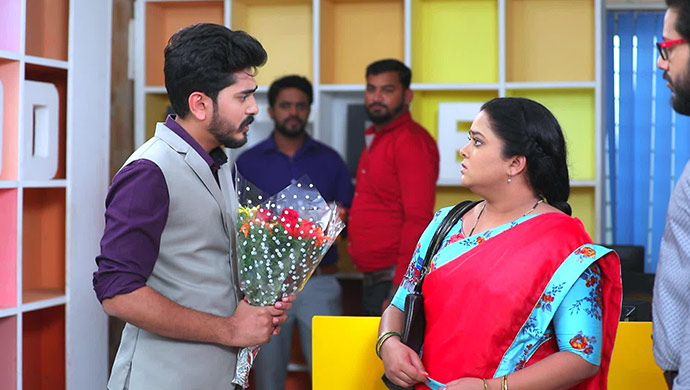 Previously on Subbalakshmi Samsara, after Subbi and Shanaya hire goons to find Gurumurthy, the former starts her own business venture and guess what she hires Shanaya as a subordinate in her company. All of a sudden, Gurumurthy appears out of nowhere one day and expresses his wish to enter Subbi’s life once more. While Shanaya tries to win his heart again, all Guru expresses for her is discomfort and hatred. So much so, that he slaps her a couple of times too. Subbi, on the other hand, makes it clear to Guru that even though she is staying with him in the same house, it is only for Atharva that she will continue to do so.

However, one-day Shanaya comes pleading to Subbi about helping her get a job in Guru’s office. As Subbi is speaking to her, Guru arrives there and furious to see Shanaya. Without looking twice, he slaps her on the face and her Subbalakshmi to stay as far away from her as possible. The next day, much to Anand’s annoyance Shanaya lands up in the office, followed by Guru and Subbi. Guru’s boss thanks Subbalakshmi for agreeing to come for the pooja and also invites to inaugurate their branch in Bangalore. By this time, Shanaya re-instates herself into the company with some excuse. Guru too agrees to let her back and tells everyone that he wants to prove that no matter how many women like her are around him, he won’t stray again.

Let’s read about what happens next…

1. Subbi is shocked when Guru gives her a bouquet of flowers

2. He then goes down on his knees and apologises to Subbi for everything he has done

3. Shanaya, who watches this from a distance gets extremely jealous and accidentally ends up hurting herself

4. Anand uses this opportunity to throws hilarious taunts at Shanaya looking at her helpless state

5. Soon, Subbalakshmi goes crying to Bharti Aunty about what happened at the office earlier

6. Amused, Bharti aunty asks her why she is upset when this is a moment to celebrate

7. Subbi then vents her heart out about the fear she has if Guru were to disown her again

8. Janakamma comes early the next day to help Subbi pack her raw materials

9. Subbalakshmi expresses her gratitude to Janakamma for taking out the time to help her

10. Elsewhere, Vaishnavi is surprised to see Shanaya all up and ready early in the morning and probes further

11. To this Shanaya informs her that she is leaving early because she has some work with Subbalakshmi so she is going to meet her

12. Vaishnavi immediately asks Shanaya to stay away from Guru and Subbi’s life but fails in convincing her

13. Guru tries to have fun with Subbi but the latter isn’t interested in any kind of romantic talks

14. Shanaya arrives at their house, much to Guru’s annoyance

15. She doesn’t leave till Guru promises to unblock her number

16. Shortly afterwards, while Bharti aunty and Subbi’s friend are happy to see her

17. They get shocked to see Shanaya going with Guru in the car

18. At the office, Anand and the other employees are shocked to see Guru and Shanaya coming to the office together

Is this all part of Gurumurthy’s plan? Or has he changed for good? Stay tuned to the next update to find out.

Watch Shivarajkumar’s Vajrakaya to continue your entertainment on the ZEE5 platform.

Watch The Audio Launch Of The Challenging Star Darshan's Film Kurukshetra, Streaming In HD Only On Your ZEE5