You’ve seen him as a quiet, calm and composed man in his role on Kamali. Wait till you see his prankster-naughty side. 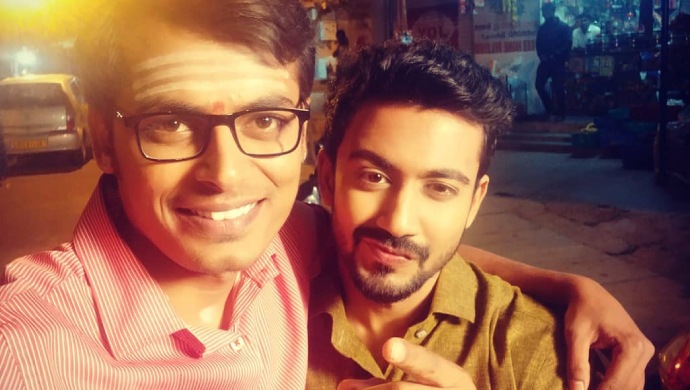 A perfect work-life balance is what every adult looks to achieve in today’s time. Suhas Athreyas aka Shambu on Kamali is no different. Although he doesn’t mind the work at all, he makes sure to even his life out with off-screen fun and majaa. Suhas is a very different person when not in front of the camera. He has a handsome persona and does well to keep up to this image.

Watch how Kamali saves Ningi from harm in this episode:

Talking about his pastime off-shoots, he loves to make music or dialogue-based videos of himself and his colleagues. Suhas, who is known for the way he solves problems in the serial, has an entirely different way of dealing with things in real life. Let’s take a look.

The reaction given by Rachana Smith (Anika Mahajan) and Ankietha (Ningi) will leave you hysterical!

Koushik (who plays the roles of Tejas on the show) and Suhas have expertly danced on this Nepali song trending on all the social media platforms.

Although trying to cheer Ariana (played by Anika), Shambu gets a taste of her anger towards the end. This hilarious clip is the best of the lot.

Another bit where Suhas dances to this song accompanied by Anika Mahajan.

It’s all about funn! 😆😅 @suhas_athreyas partner in crime! 😊😉

Although the former is obsessed with the latter in this clip, she doesn’t give up hope until the end. They, however, look very cute together even otherwise, don’t you think?

Were you as surprised about Suhas as us? Let us know what you think about this cool dude in the comments section below.

Watch your favourite Kannada movies by streaming them on ZEE5.

Amriki Dulha Is A ZEE5 Original Series That Will Be Relatable If You Too Were Pestered To Get Married. Watch It Now