Don't miss the world digital premiere of the Nikhil Kumaraswamy and Rachita Ram-starrer Seetharama Kalyana, which releases on ZEE5 on September 13 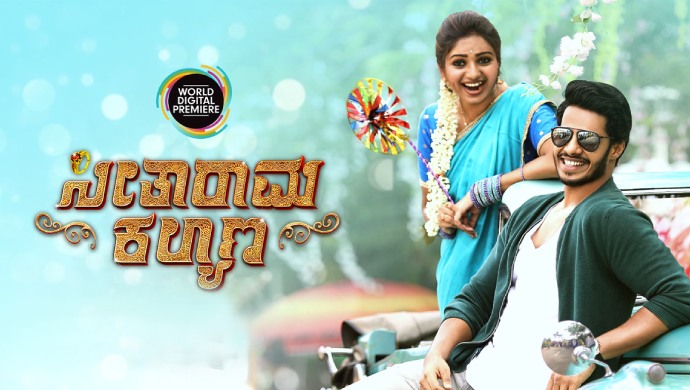 Even before its inception, director-choreographer A Harsha was clear that his film Seetharama Kalyana should be a far cry from the cliched Kannada movies. As a result, the romantic action flick, which stars Nikhil Kumaraswamy, son of Karnataka CM HD Kumaraswamy and the Dimple Queen of Sandwood, Rachita Ram, doesn’t have a single duet song featuring the lead actors.

Every scene, sequence and song has been well-knit by A Harsha, who has been ably supported by producer Anitha Kumaraswamy, Nikhil’s mother. The filmmaker not only cast big names like P Ravishankar, Chikkanna, Girija Lokesh and actress Madhoo in supporting roles but also roped in Bollywood actors like Bhagyashree and Sanjay Kapoor.

During the film’s theatrical release, Harsha had mentioned to a daily why cinegoers shouldn’t miss this movie.

Check out a recent promo from our official social media handle:

The Vajrakaya and Bhajarangi director said, “First of all, there is no mass, introduction song for the hero, Nikhil Kumar, simply because it is not required. Also, there isn’t a fantasy track that is shot abroad. Being a choreographer, I feel that foreign song shoots are very confusing and not planned since we don’t get to see the location beforehand. This messes things up a lot, which is why I choose to stay away from them. I was particular that everything in this film should be local, including the way the songs look. People anyway prefer montage tracks that take the movie forward.”

He added, “If you ask me why people should watch Seetharama Kalyana, I’ll say they should do so to get entertained. The movie is a complete package, with comedy, a cute love story, family emotions and action sequences.”

Moreover, he said, “And it’s not like Rachita is there for a few songs and scenes; she has a meaty role, which is performance-oriented.”

Seetharama Kalyana is set to release on ZEE5 on 13th September 2019, so stay tuned.

If You Are A Rachita Ram Fan, Click Here To Watch The Hit Blockbuster Film Natasaarvabhowma, Streaming On Your ZEE5

Paaru Weekly Recap Of 4-10 September 2019: Gani Puts His Life In Danger To Save Akhila