Even though Prakash Sir is 54 now, he still looks young and handsome, don't you think? 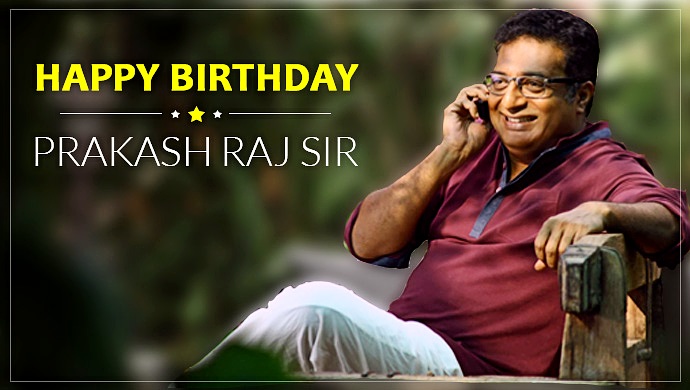 Namma Prakash Raj Sir was born as Prakash Rai in the state of Karnataka. At 54 years, this veteran has achieved colossal success and fame, thanks to his brilliance in everything he puts his hand in. Be it films or politics, this actor is an inspiration to many.

This humble gentleman started his career on TV with Doordarshan serials in Kannada and Tulu. Soon, he started doing supporting roles and was then recognised for his impeccable dialogue delivery coupled with dramatics all the way. His breakthrough was in a 1992 film with Namma Sahasa Simha Vishnuvardhan Sir called Harakeya Kuri.

Prakash Sir is a multilingual actor who has performed in Hindi, Kannada, Tamil, Telugu, Marathi and Malayalam films. For those of you who might not know this, he is a producer, director and a TV presenter too!! How much ever praise we give this man, not only for his contributions to the film and TV industry but also for his humanitarian work, is considerably less.

There are multiple accolades under his belt, including the SIIMA Award For Best Actor In A Supporting Role in 2011 for the film Dookudu (Telugu), Tamil Nadu State Award For Best Villain in 2009 for the film Villu (Tamil) and Vijay Award For Best Actor in 2008 for the movie Kanchivaram (Tamil). The birthday boy has also performed in over 2000 street theatrical plays. If you are a fan, it is your turn to wish the thespian in the space below.

If you are interested in his multilingual roles, watch his work in Zanjeer in Hindi or No 1 Businessman in Telugu on ZEE5 right away!

Golden Star Ganesh Got The Opportunity To Romance 4 Actresses In Mugulu Nage. To See Who They Are Watch The Movie Here

Did You Know That Akhilandeshwari Amma Has Found A Prospective Groom For Namma Paaru?