Sa Re Ga Ma Pa Li’l Champs Season 16 Recap: The ‘Getup Round’ Will Turn Your Heart To Mush

Gnana and Parnika looked so cute in their getup while Abhisyanth and Rohan wore strong-rugged costumes. Don't miss Sakshi and Nayana's scary outfits! 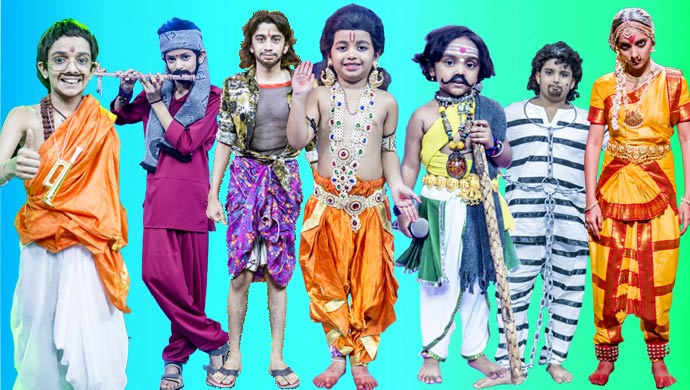 After a brilliant welcome to a new weekend, hostess Anushree announced the ‘Getup Round’ as the speciality of the past weekend on Sa Re Ga Ma Pa Li’l Champs Season 16. The round would look at contestants in fancy dresses or getups corresponding to their song. The coolest thing was that even the grand jury was wearing bright costumes as their way to support the puttanigalus. What a brilliant way to engage the little future singers of Sandalwood right?

Now, let’s take a quick look at what happened in the getup round, shall we?

This talented boy sang the hit song Dum Dum Dol Rock and Roll from the movie Anjada Gandu and got a golden buzzer for it. His attempt towards replicating the onscreen character on-stage was brilliant.

Gnana is the cutest kid on the entire Zee Kannada roster and you have to agree. Despite being under the weather, the 3.5-year-old kid strutted confidently on-stage and sang the peppy number Kuladalli Keelyavudo from the hit film Satya Harishchandra and obviously got a golden buzzer from her best friend and the Mahaguru of the show, Nadabramha Hamsalekha sir.

The ideal son to his parents, Abhisyanth was seen in the Real Star Upendra’s getup and he looked like a miniature hero plucked straight out of the movie. The lad sang the hit song Maari Kannu Hori Myage for Uppi dada’s movie A.  While the Mahaguru allowed the Grand jury to score, his luck shined when he got a 100/100, on the scoreboard, which means golden buzzer.

Did you know that the song sung by Shreyas, Ee Bhoomi Bannada Buguri from the film Mahakshatriya, is a poem originally composed by the Mahaguru and appears in school textbooks? Also, the shy Shreyas gave a golden buzzer worthy performance so I say the song was given justice!

Get ready to be freaked out by Sakshi’s costume as she sings the hypnotising song Bara Sanihake Bara from the superhit film Apthamitra. There was no way she wasn’t getting the golden buzzer, after doing some impromptu moves while singing on-stage.

Dressed as Namma Kiccha Sudeep, the young Sunadh sang the romantic song Love Aagoythe Nin Myaale from The Villain and scored a 90/100. For the costume, however, this lad deserves full marks! Don’t you agree?

In a quirky outfit, the little Aprameya performed on the hit song Doddavarella Janaralla from the film Guru Shishyaru and won an enthusiastic golden buzzer, from the Mahaguru.

Monamma’s colourful outfit perfectly synced with her voice when she sang Arerere Ginirama from the film Gandada Gudi. She heaved a sigh of relief when the Mahaguru praised her performance with a golden buzzer.

Dressed in an inmate’s clothes, Namma Siddegowdre sang the song Nanu Yaru Yava Ooru from the film Antha. While Hamsalekha sir was slightly contemplating about giving him full marks, he eventually gave the benefit of the doubt to this cute boy with a golden buzzer.

Dressed a miniature Aiyappa was the 6-year-old Parnika who sang Devare Ninu Nijavappa from the hit film Shabarimale Swamy Ayyappa. Her cuteness and voice both matched her costume and won her the golden buzzer.

With one small konde on his head, Omkar adorably performed on the song Naanu Putnanja from the prominent film Putnanja. His quirkiness in the song and getup overall earned him the golden buzzer.

From the film Yaare Neenu Cheluve, Gadag’s Sangeetha dressed up as a man with a wig and everything. Her song was Chinte Yaako Maduthiya and she was rewarded with a golden buzzer.

After Sakshi, get ready to hide under the bed once again, Nayana dressed up as a wandering ghost and sang Thangaliyalli Naanu from the film Janma Janmada Anubandha. Thanks to the fear quotient she spread, her performance got a golden buzzer.

Dressed as an old man, the Haveri girl Rubina, performed on Allah Allah from the film Guri. Her performance fell short just a little as she landed up with 94/100 points.

With the song Thuttu Anna Thinnokke from the film Jimmy Gallu, Bhargav won the judges’ hearts as well as the jury’s. So there was just no way he wouldn’t get the golden buzzer.

Dressed up as a beautiful lady in the olden days, Meera sang the famous song Sanyaasi Sanyaasi Arjuna Sanyasi from the film Edakllu Guddada Mele and scored 90.6/100.

Apart from these, Rohan got a complimentary pass from Wonderla too! Isn’t that super cool? Also, did you notice, that all except three participants got the ‘Golden buzzer’ either from the Mahaguru Nadabramha Hamsalekha or from the Grand Jury? Apart from the fun and frolic that went on this week, the judges spoke about their next week’s challenge, which will be the ‘Evergreen round’. In this round, the contestants will be made to sing evergreen hits of Sandalwood. Hope you are ready because the coming weekend might be one of the puttanigalu’s last week.

Which contestants won your heart in the ‘Getup’ round? Send in your comments through the box given below.

Watch The Vinaya Prasad Special On Weekend With Ramesh Season 4 To Know Some Exclusive Facts About The Veteran Actress, Streaming In HD On ZEE5.

On The 13th Anniversary Of Our Beloved Zee Kannada, 16 Celebs Sent Their Best Wishes

Vinaya Prasad And Shashikumar Had Memorable Moments On Weekend With Ramesh 4: A Recap