Sa Re Ga Ma Pa Li’l Champs: B Jayashree Was A Special Guest On The Janapada Vaibhava Round

Judge Vijay Prakash made it back to the set and made us all emotional with the truth. Also, thanks to the puttanigalus the ‘folk song’ round was a hit 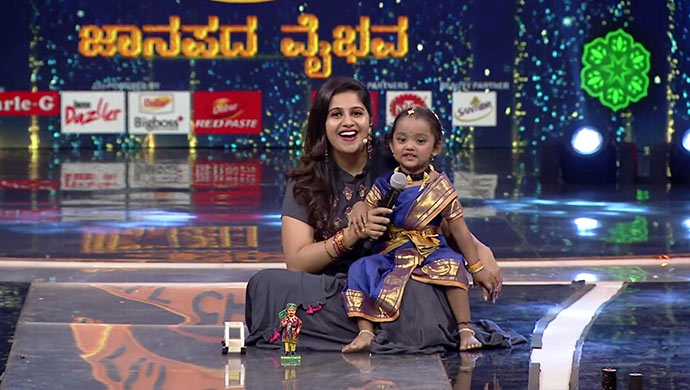 Many amazing things happened last weekend on Sa Re Ga Ma Pa Li’l Champs Season 16, but the best thing was the return of the third judge Vijay Prakash sir after almost two months. His reason for not being available for so long brought tears to everyone’s eyes as VP sir’s beloved father passed away in the month of April early this year. He then spoke of how much he missed the show and being a judge on it. Soon, he also recited an emotional poem dedicated to his father. Hostess Anushree informed the viewers that Music Mantrika Arjun Janya is feeling a little under the weather so he couldn’t make it on the Janapada Vaibhava aka Folk Song Round.

Not only was the stage beautifully decorated with village feels but the hostess also learnt about the Mahaguru Hamsalekha’s opinion about folk songs in general. Finally, before the contestants were called upon the stage, Anushree invited the special guest B Jayashree Amma, a well-known folk singer in the state to be part of the competition.

Without any further ado, let’s check out the performance card of all the puttanigalus, shall we?

His folk-song Haadidavara Manavaballe earned him the golden buzzer from the Mahaguru.

Nayana sang Mangalaratiya Belagiro Mahadevange and got a great appreciation for her melodious folk voice. The gold buzzer soon followed

In two separate performances, these little girlies won our hearts by singing, Ello Jogappa and Chennappa Chenne Gowda, respectively. Both their performances fetched them the golden buzzer.

The lovely duet of Sangeetha and Rubina was well received by the audience as they sang the song Mayadantha Male Banthanna. This performance got them the golden buzzer.

Falling short of a full score was Meerabai, whose performance on the hit folk song Kollanna Kole got a score of 92.6/100, from the grand jury.

Sakshi’s melodious act on the emotional song Thaayi Sattha Mele earned her a golden buzzer from the Mahaguru right away.

According to me, Shreyas and Sunadh’s performance on Adu Betta Idu Betta was ‘finale-worthy’. Even the Mahaguru thought so and gave the two brilliant budding artists a golden buzzer.

After Abhisyanth’s performance on Bidiru Naanyarigalla Davalu got the special guest B Jayashree Amma also singing. The lad fell short of the golden buzzer but secured a good score of 95.3/100 by the grand jury.

On her birthday, Monamma sang the song ‘Elli Kaan Elli Kaaneno’ and got the golden buzzer for her awesome performance Much to her surprise, Monamma’s loved ones from Raichur came down to celebrate this special day with her.

– Genius performance of the week – Gurukiran

– Dazzling performance of the week – Nayana

– Best singer of the week – Sakshi

– Best performer of the day – Rubina

The next week’s challenge will be based on Mahaguru Hamsalekha’s songs since it is the veteran’s birthday. So get ready for another power-packed weekend this week.

Send in your best wishes to the puttanigalus in the comments box below.

The Puneeth Rajkumar Starrer Natasaarvabhowma Is Your Weekend Fix If You Love Horror-Comedies Too. Click Here To Watch It On The ZEE5 Platform Now

5 Reasons Why Romantic Comedy Rajaratha Is A Must-Watch!