In the last week's episodes, the puttanigalus had great fun revisiting the songs of Sandalwood's all-time heroes but there was another elimination! 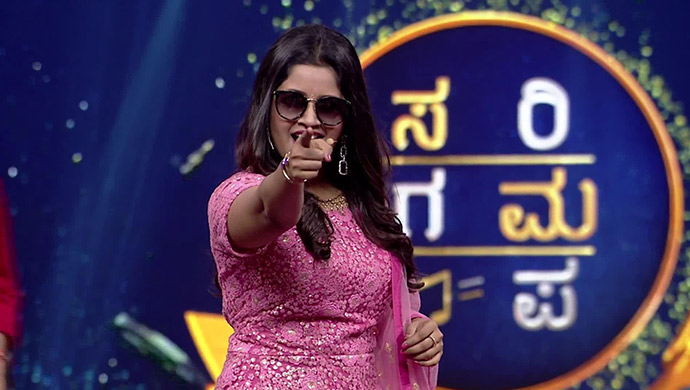 Every week on Sa Re Ga Ma Pa Lil Champs Season 16 the challenge is getting bigger and better. Especially after the eliminations last-to-last week, it seems that every week from here on there will be eliminations because last week too, a puttanigalu was eliminated. But as they say, the show must go on, the fun quotient still remains the same. With hostess Anushree keeping everyone comically entertained alongside the judges; Vijay Prakash, Rajesh Krishnan and the Mahaguru – Nadabramha Hamsalekha Sir, there is no way that you’ll be bored for even a second.

Last week on the show it was the Sandalwood All-Time Heroes Round, in which the challenge was to sing songs from the best of the best heroes of all time in Sandalwood. And here’s how the children fared.

For his performance on Annayya Thamayya from Dr Vishnuvardhan’s Kotigobba, Bhargav earned the golden buzzer from the Mahaguru.

He was given the Challenging Star Darshan’s film Airavata and sang the title track of the film. The judges were impressed by Omkar’s performance and he too got the golden buzzer.

Namma Siddegowdre sang the song I Love You from the film Moggina Manasu starring the Rocking Star Yash but fell just short of the golden buzzer with 97.3/100.

The 3.5-year-old Gnana got the golden buzzer from her best friend for performing on Shivanna’s song No Problem from the film Vajrakaya.

Even though this little angel gave her best, her performance on Ajja Allad Mara from the Crazy Star Ravichandran’s Movie Ondagona Baa fell a little short of full marks with 90/100.

Parnika got a golden-buzzer for her performance on Neene Neene from the Power-Star’s movie Akash.

Abhisyanth sang the song Jeeva Jeeva from Kiccha Sudeep’s film Maanikya and got a golden buzzer from the Mahaguru.

From the Golden Star’s film Maleyali Jotheyali, Sunadh sang on Nee Sanihake Baa and of course got the golden buzzer.

Shreyas’s act on the Ramesh Aravind film Hrudayave Ninna Hesarige was so good that the Mahaguru immediately gave him a golden buzzer.

Nayana’s amazing performance on the Srinath film Besuge’s song Yaava Hoovu will make you fall in love again. She too got the golden buzzer.

Golden Performer of the day: Shreyas

Genius Performance of the week: Parignana

Dazzling Performance of the week: Sakshi

Best Singer of the week: Abhisyanth

Best Performer of the day: Omkar

Best Singer of the week: Sunadh

Elimination: While Bhargav, Nayana, Rubina and Monamma were in the bottom four, Rubina was the one to be eliminated, unfortunately.

Rangayana Raghu And Apoorva Shri's Contribution To Panchatantra Was Brilliant. Click Here To Watch Both Of Them In The Film On ZEE5 Now

Inspired By Belli And Harini's Friendship: 5 Secrets Only Your Best Friend Will Know