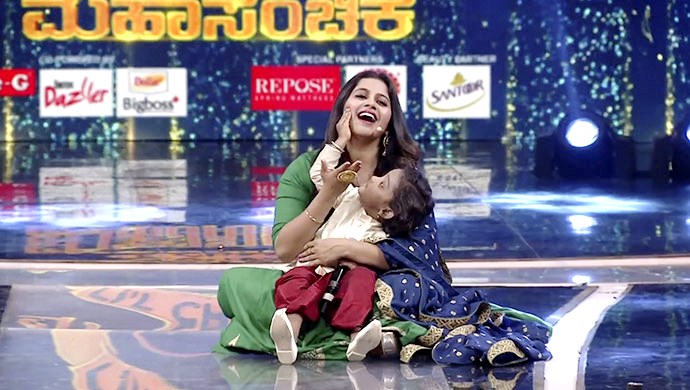 Like every weekend, the makers of Sa Re Ga Ma Pa Li’l Champs Season 16, did a brilliant job with the concept last week too. It was the ‘Popular Song Round’ wherein the Puttanigalus had to sing songs that the fans hold most dear to their heart, and you will be surprised with the assorted range of songs. After welcoming the guests, hostess Anushree made the judges Rajesh Krishnan, Arjun Janya and Mahaguru Hamsalekha recollect their all-time favourite melodies too. Turns out the Music Mantrika’s favourite song is the hit retro song of Bollywood, Kya Hua Tera Vada. Also, the Mahaguru is a huge admirer of the late singing legend of Bollywood, Md. Rafi sir.

Post all the fun in the beginning, the competition was fierce and a lot of participants got the golden buzzer. So without further ado, let’s check out the scores for each Puttanigalus, shall we?

With a melodious song like Kana Kanade Sharade from the film Aaptamitra, there was no way that Gurukiran was getting anything less than a golden buzzer.

We all know that Mahaguru Hamsalekha makes songs for the young Kannadathis of the state, so Rubina picked an apt song she adores. It was Sikkare Sikkare Avakasha and fetched her a whopping 91.3/100 for her performance.

Young Rebel Star Ambareesh aka Abishek Ambareesh paid a visit to the sets to promote his film, Amar

Namma Siddegowdre sang the melodious title song of the Arjun Sarja starrer film Prema Baraha and impressed everyone. So much so that when it was Rajesh Krishnan sir’s chance to say something he directly pointed to Mahaguru and asked him to press the golden buzzer.

Just missing the golden buzzer, Sakshi scored 98/100 for her performance on Mussanjeli from the film Ranaranga.

One of the best performances of the week was Omkar’s, who sang Vajra Ballalaraya from the film Saarathee. He also scored a well-deserving golden buzzer for his performance.

Sumalatha Ambareesh sent a heartfelt message for her son, this film and everyone on the show

Not only did Abhisyanth get the golden buzzer for his performance on the song Natana Visharda Natashekhara from the film Malaya Marutha, but the Mahaguru also claimed that he will be in the top 5.

Mahaguru praised this boy for learning well from his mentors for the song Innu Gyaaranti from the film Nanjundi Kalyana and gave Aprameya, a well-deserving golden buzzer for his performance.

Another golden buzzer-worthy performance by Shreyas who did great justice to the song Beladingalondu from the film Premaanubandha.

Written by the Kannada legend Nissar Ahmed, Parnika got the opportunity to sing the patriotic song Jogada Siri Belakinalli and got a golden buzzer from the Mahaguru.

Even though Meerabai didn’t get the full score for her performance on Jodi Bedo Kaalavamma from the film Bhakta Kumbaara, she stands second highest along with Monamma after Sakshi, with 96.6/100.

Nayana too, couldn’t get a full score but performed really well on the song Megha Raja from the film Sipayi and got 92/100.

The final performance was by Bhargav and he too missed the full score mark by securing 90/100 for his performance on Poojyaya Raghavendraya, a devotional Kannada song.

Now that you know how each kid fared, let’s take a look at the Awards list:

Best performance of the week – Abhisyanth

Dazzling performer of the week – Monamma

Best singer of the week – Omkar and Aprameya

The coming weekend’s challenge is the Performance round, where each contestant will be judged on their singing as well as dancing talents. So don’t forget to tune in this weekend!

Watch your favourite Kannada shows, streaming for free on the ZEE5 platform.

Natasaarvabhowma Starring Puneeth Rajkumar Will Leave You Speechless By The End. Click Here To Watch The Movie If You Think Otherwise. Streaming Now On The ZEE5 Platform

If You Are A Fan Of CGI And Graphics, Nagarahavu Is A Gem That Deserves Your Attention