Sa Re Ga Ma Pa Li’l Champs 2019 Quarter-Finals Round Has Finally Dawned Upon Us: A Recap

Last week on SRGMP Li'l Champs Season 16, the quarter-finals began in full spring. However, we were SHOCKED when this contestant was eliminated... 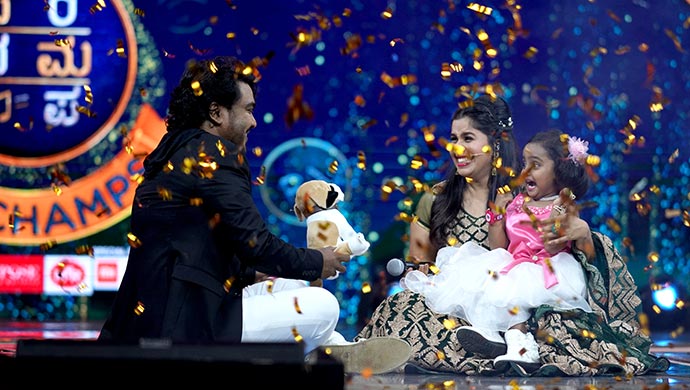 After so many fun-loving, entertaining and educating rounds like the ‘Superhit-Jodi Recreation Round‘ or the ‘Family Round‘ or even the ‘All-Time Heroes Round‘ on Sa Re Ga Ma Pa Li’l Champs Season 16, the show has finally come to a point of the Semi-finals. Thankfully, last weekend, we witnessed all the three judges to show their love and support to the puttanigalus alongside the Mahaguru Nadabramha Hamsalekha Sir. Hostess Anushree, as usual, had the audience captivated with her adorable wit and charm.

For his melodious performance on the song Ellellu Sangeethave from the film Malaya Maruta, little Aprameya ended up with a proud golden buzzer from the Mahaguru Nadabramha Hamsalekha.

Selecting a Lord Ganesh song, Maha Ganapati from the Shivanna film Asura, Monamma’s act was well-executed. So much so that, all the judges not only praised her amazing performance but also sang a few lines with her. The golden buzzer was obviously next!

From the 1975 Kannada film Kaveri, little Gnana correctly sang the song Ee Desha Chenna and sounded like a doll. Well, she is a doll, so Mahaguru’s golden buzzer was absolutely worth it, don’t you think? Not only this, she got a small stuffed toy from Namma Arjun Janyaji too!

Sung by the famous Kannada singer MD Pallavi, Sangeetha performed on the melodious track Deepavu Ninnade. The judges pointed out how far Sangeetha has come along since her mega-auditions and praised her for the exceptional beginning. The grand jury awarded her a whopping 95.3/100. What was surprising was that farmers of the state got together and pitched in their hard-earned money to send this lovely little girl a cheque of rupees one lakh. Apart from this, from a few other organisations, a cumulative of four lakhs were sent for her family and her future. The initiative from namma raitaru (farmers), however, was the most commendable.

From the Crazy Star film Gadibidi Ganda, Abhisyanth sang the song Neenu Neene and floored the judges, Mahaguru, the grand jury and the audience. His splendid voice modulation for the song earned him the golden buzzer.

Bhargav sang the DBoss song Sakkathagavle from the film Porki and entertained the judges with his dance steps in between (as you can see in the image). Like a hero from a film, Bhargav’s performance earned him a well-deserving golden buzzer.

Picking a song from Dr Vishnuvardhan‘s film Gurushishyaru, Nayana beautifully sang the song Deenala Moreya. Her outfit resembled a yesteryear actress and her confidence in the quarter-finals was praise-worthy. However, she fell short from the golden buzzer and got 92.6/100 from the Grand Jury.

Omkar Pattar, at such a young age, could pull off the lovely song that is Karunade from the V Ravichandran film Malla. After some well-deserved praises from the Mahaguru, Omkar was graced with a golden buzzer.

Another Dr Vishnuvardhan song, i.e, Aparadhi Naanalla, from the film Rayaru Bandaru Mavana Manege thoroughly entertained the audience. Especially, Shreyas’s impressive voice had to get him a golden buzzer from Hamsalekha sir.

Usire Usire from Kichha Sudeep‘s blockbuster film Huchcha was sung by Namma Siddegowdru and boy did he look dashing in that gentlemen’s suit or what? His melodious voice touched the judges’ heart and he got the golden buzzer only because Mahaguru was surprised at how well Rohan made a Rajesh Krishnan song, his own.

From the legendary 1995 film Sangeetha Sagara Ganayogi Panchakshara Gavai, the young lad Gurukiran sang the song Gaana Vidya and the result was…exceptional (as you would have seen above). The Grand Jury gave a standing ovation to this boy and the Mahaguru was so impressed that along with a golden buzzer, he gave Gurukiran a one-way ticket to the Grand Finale!

From the adorable film Swati Muttu, little Parnika sang the even cuter song Laali Laali. All the judges did was kept looking at this six-year-old princess giving her best on stage. Since Mahaguru gives her the golden buzzer every time, this time he made Sangeetha do it.

Sunadh’s performance on Ee Sundara Beladingala from the hit film Amruthavarshini was a hit amongst the audience and the judges alike. This obviously resulted in a golden buzzer from Namma Hamsalekha sir.

From the movie Inthi Ninna Preethiya, Sakshi sang the song Madhuvana Karedare and it earned her a whopping 98.6/100 from the Grand Jury. Apart from this, Vani Harikrishna (a part of the Jury) herself sang a few lines and took everyone into a magical world with her voice.

Golden performer of the week: Aprameya

Genius performance of the week: Parignana

Dazzling performer of the week: Sakshi

Best singer of the week: Gurukiran

Best performer of the day: Omkar

Best singer of the week: Shreyas

Elimination: In the danger zone were, Bhargav, Nayana, Sangeetha and Monamma. However, Nayana, unfortunately, had to say goodbye to the show in the quarter-finals.

Don’t miss this weekend’s semi-finals round, to know who got selected for the finals.

Watch the latest episodes of the hit show Gattimela, streaming here on ZEE5.

All Krishna Ajai Rao Fans Get Ready To See Him In A Power-Packed Character In The Film Thayige Thakka Maga, Streaming Here On ZEE5