Last week on the Superhit Latest Songs special, there was amazing news as well as some sad news because another elimination took place. Guess who? 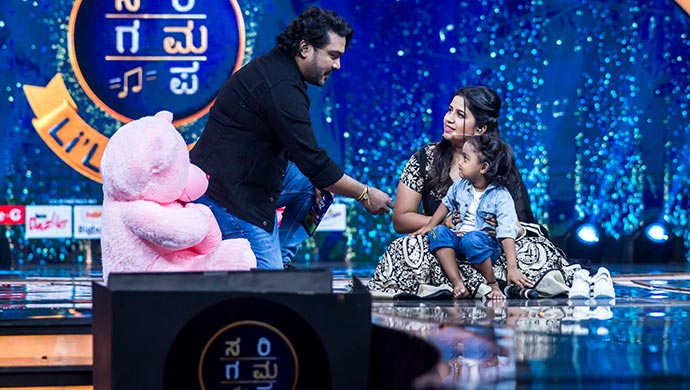 With its unique rounds like the performance round, or the Superhit Jodi Recreation round, or even the Getup round, there is absolutely no doubt that Sa Re Ga Ma Pa Li’l Champs Season 16 is the blockbuster singing show in Karnataka. Every week has been a joyride for the little puttanigalus, but after a long time, we have a piece of good news and bad news for you. The good news is that the three judges Vijay Prakash, Arjun Janya and Rajesh Krishnan were back on the show together after a really long time. The sad news, however, was that last week saw the elimination of some puttanigalus too.

With hostess Anushree entertaining the audience with her quirkiness and knack for getting away with children, Mahaguru Hamsalekha gave some good advice in the ‘Superhit Latest Songs’ round and rightfully so. So without further ado, let’s look at how the students fared. A fair warning, only a few got the golden buzzer, either from the grand jury or the Mahaguru.

3. Little Gnana got the golden buzzer for her performance on Tick Tick Tick (The Villain)

4. Sangeetha and Rubina got a golden buzzer for their act on Ninna Raja Nannu (Seetharama Kalyana)

6. Meerabai wasn’t far behind with 91.3/100 for performing on Ka Thalakatu Ka from Mr Airavata

9. Sunadh was the recipient of a golden buzzer for his performance on the Yajamana title track

11. Aprameya and Gurukiran got the golden buzzer for their duo-performance on Kelu Krishna (Rama Rama Re)

12. Abhisyanth’s Darshan look pleased the audience and won him a golden buzzer for his act on the title song of Chakravarthy

Now, time to look at the awards:

– Performer of the week – Sangeetha

– Genius performance of the week – Parignana

– Dazzling performance of the week – Sakshi

– Best singer of the week – Sunadh

– Best performer of the week – Omkar and Abhisyanth

– Best singer(s) of the week – Gurukiran and Aprameya

Elimination: The fours contestants in the bottom four were, Bhargav, Meerabai, Nayana and Rubina. Unfortunately, Meerabai had to leave the show.

Next week’s challenge: Nayaka Natara Suttu aka the All-Heroes Round.

Watch your favourite Kannada shows on the ZEE5 platform.