July 13-14th weekend, ex-contestants aka the seniors of the past seasons came to support the puttanigalus including Sanjith Hegde and Keerthan Holla. 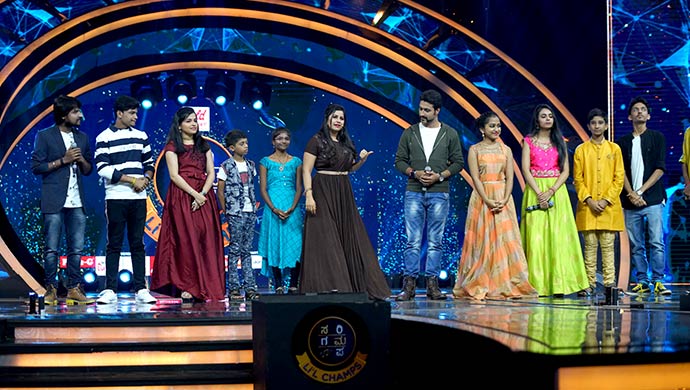 Once again last week on Sa Re Ga Ma Pa Li’l Champs Season 16 felt complete with the presence of all three judges; Vijay Prakash, Rajesh Krishnan and Arjun Janya. To make it more interesting, hostess Anushree introduced the new challenge for the weekend to everyone and guess what? Many senior members from the SRGMP fame, i.e, older contestants from all the previous Sa Re Ga Ma Pa seasons were welcomed on the show. Since it was the ‘Celebration Round’, the hostess mentioned that these senior members will sing along with their junior partners to ensure maximum scores for each puttanigalu.

So are you ready? Let’s begin with each pair’s performance and scores…

What a fantastic start it was to the weekend with Omkar and the winner of Sa Re Ga Ma Pa Season 14 winner Vishwaprasad, who sang on Re Re Bajarangi from Shivanna’s film Bhajarangi. This exceptional performance not only had the judges clapping for the duo but also got them a golden buzzer.

Now known as ‘Janapada Lakshmi’ for reviving the folk song ‘Yavo Deshada Gandu Ivanu’, Lakshmi and Monamma got the opportunity to perform on the same song. Mahaguru Hamsalekha was so impressed by Lakshmi’s intentions that he offered her a Bachelors and Masters degree in his institutions in Bangalore after she completes her 2nd PUC (Pre-University College). All this because he too believes the youth like her will be a great source in reviving folk music of Karnataka. What a fabulous thought, don’t you think?

From the movie Snehaloka, Rohan and the winner of Sa Re Ga Ma Pa Season 11, Channappa sang the hit song Titanic Heroine and obviously got the golden buzzer for their melodious performance. A cool fact about Channappa is that he got an opportunity to act in a film since his victory in Season 11! Watch out for the film ‘Lightagi Loveagide’.

Shreyas and Prithvi Bhat, who wanted to come on Sa Re Ga Ma Pa since she was in the 2nd grade, sang beautifully on the song Giri Navilu Ello from the hit film Hrudaya Hadithu. They scored full marks for their performance that means a golden buzzer.

These two pretty ladies sang the song Nanna Jeeva Neenu from the hit film Geetha and their voices absolutely touched the judges’ hearts as well as the audiences alike. For such a great performance they got a golden buzzer.

The beautiful song Karedaru Kelade from the film Sanaadi Appanna was sung by the winner of Sa Re Ga Ma Pa Season 10 Supriya Joshi and Nayana and their performance resulted in 89.3/100 by the grand jury.

The most eligible bachelor from Sa Re Ga Ma Pa Season 13, Shree Harsha performed on the famous Raghavendra Rajkumar song Colour Colour from the film Swasthik, with little Aprameya. Their performance earned them a well-deserving golden buzzer. After the act, Anushree told us about a film Shree Harsha has signed up for called #Eleven.

The tiny tots of Sa Re Ga Ma Pa Li’l Champs Season 16, Gnana and Parnika sang on the DBoss Darshan‘s song Nille Nille Kaveri from his famous film Bul Bul. Mahaguru and the judges were floored by their little dance steps and they earned the well-deserving golden buzzer.

From the film Yuddha Kandha, Sangeetha and the Sa Re Ga Ma Pa Season 13 winner Sunil sang the song Sole Illa Ninna Haadu. While their performance was amazing, it fetched them 89.3/100 by the grand jury.

Known as the Smiling Star of Sa Re Ga Ma Pa Season 12, Darshan had the chance to do a duet with Sunadh and both of them sang exceptionally well on the song Kelade Nimageega from the hit yester-year film Geetha. For their heart-winning performance, the Mahaguru gave them the golden buzzer.

From the Puneeth Rajkumar film Hudugru, Abhisyanth and the winner of Sa Re Ga Ma Pa Season 15, Keerthan Holla performed on the sakkath song Shiva Shambo. Their act was so brilliantly co-ordinated that the Mahaguru couldn’t keep his hands of the golden buzzer.

The famous Sanjith Hegde along with his singing partner Gurukiran shined brightly while performing on the song Kanneera Dhaare Ideke. The song left everyone speechless because of its nature. Especially Mahaguru, who almost had tears in his eyes. Obviously, the two singers rejoiced at the golden buzzer they received.

From the Rocking Star Yash film Mr & Mrs Ramachari, Sa Re Ga Ma Pa Season 14’s Tejas Shastri and Bhargav performed on the song Annthamma and boy did they rock the stage or what? The golden buzzer was theirs in the end.

Golden performance of the week: Abhisyanth

Genius performance of the week: Gnana and Parnika

Dazzling performance of the week: Sakshi

Best performer of the day: Omkar

Best singer of the week: Aprameya

Best singer of the week: Gurukiran

Stay tuned for this week’s new challenge, coming up soon.

If You Too Loved The Season 4 Of Weekend With Ramesh, Here's Your Chance To Watch All The Episodes Of This Season Once Again, Streaming Only On ZEE5