Sa Re Ga Ma Pa Li’l Champs 16 Recap: Puttanigalus Outdid Themselves In The Evergreen Round

After Sunadh’s melodious performance, the Mahaguru predicted that he will be in the top 5. He also claimed that Sangeetha gave her best performance. 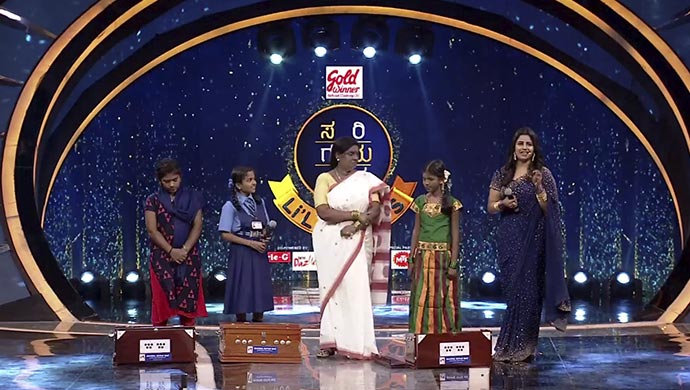 On Sa Re Ga Ma Pa Li’l Champs Season 16, every week has something new and interesting not only for the contestants but also for us as fans. After the ‘getup’ round, it was time for puttanigalus to take it up a notch with the ‘Evergreen Round’. The challenge was to since the best songs Sandalwood has seen since its inception. As usual hostess Anushree kept the audience glued with her quirky-ness onstage. Judges Rajesh Krishnan and Arjun Janya alongside Mahaguru reminisced the great musical treasure of Namma Sandalwood.

So without further ado, here’s a quick recap of the ‘Evergreen Round’ on the past weekend’s episode.

2. Sunadh sang Manasa Sarovara from the same film and got the golden buzzer from the Mahaguru

3. Sangeetha gave her voice to the song Hasiru Gajina Balegale (Avane Namma Ganda) and got 94.6/100 from the grand jury

11. Sakshi’s voice while singing Naguva Nayana (Pallavi Anu Pallavi) got her a golden buzzer for the second consecutive time.

14. The tiny little Gnana sang Noorondu Nenapu (Bandhana) and there was no way the Mahaguru could give her less than that 100/100 and the golden buzzer.

Cheer for your favourite puttanigalus in the space given below.

Watch your favourite Kannada shows on the ZEE5 platform.

Kiccha Sudeep's Role As Captain Raam In The Hit Film Hebbuli Will Make You Fall In Love With Him All Over Again. Click Here To Watch It On The ZEE5 Platform

The Award For The Best Date Of 2019 Goes To Kamali And Rishi, Without A Doubt