Sa Re Ga Ma Pa Is Back With More Auditions And Tough Competition! 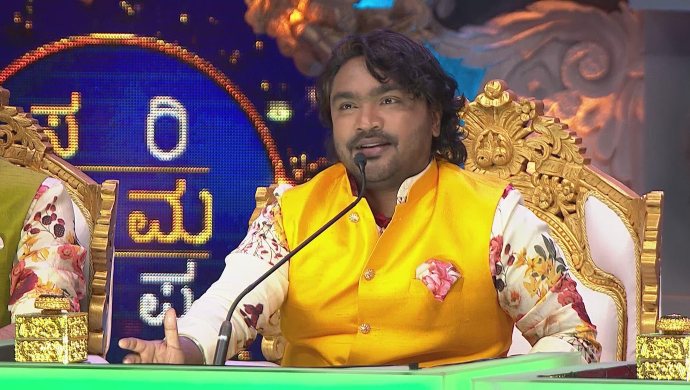 In last week’s episode of Sa Re Ga Ma Pa, the mega auditions began with Vishwatha who got much appreciation from all the judges while the young and pretty Asha Bhat won the maximum applause from the judges for her melodious voice. Darshan, our contestant #7 beat everyone with his oh-so powerful and cheerful voice! Read the highlights of the episode, inside.

Gorgeous Anushree returned to host the show and was her glamorous and entertaining self, as always.

Decked up in traditional outfits, the judges looked dashing as ever! They were required to blindfold themselves once again and were asked to listen to the potential contestants of the show.

The first performance of the show was by contestant #12, the very talented Ashwin Sharma who sang Ee Sundara Beladingala from the movie Amruthavarshini.

The next performance was by Sarvadhnya who sung Nee Enage Guruvaga Bekendu from the movie Shivayogi Shri Puttaiyajja and we must say, that he gave no less than a perfect performance in this one.

Another performance was from the 70’s hit Sampige Marada from the movie Upaasane, which was sung by Priya K.V, who is unfortunately in the waiting list, but we hope she gets through this tough fight.

Sharadhi Patil, who has studied music, swept us off our feet with her melodious voice.

Getting us into a patriotic mood was Bindu who sang Karnatakada Ithihasadalli from the movie Krishna Rukmini, originally sung by S. P Balasubramanium.

The show wrapped up with a performance by Sharan Kumar who is also currently in the waiting list.