Rocking Star Yash Joined The Shoot Of KGF: Chapter 2 On 6th June And Fans Are Rejoicing

The monster hit KGF: Chapter 1 encouraged the team to come up with the sequel and here are the latest updates to Yash’s next venture, KGF: Chapter 2 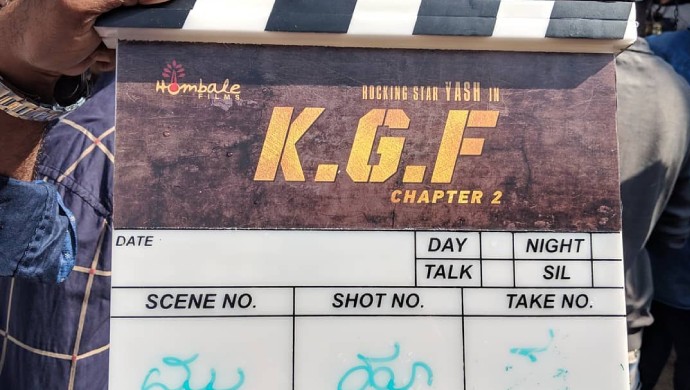 Basking in the glory of the mega-blockbuster KGF: Chapter 1, is the entire team of the film, cast and crew included. Now, gearing up for the sequel, KGF: Chapter 2, everyone including Rocking Star Yash showed their excitement for their next big adventure. Directed by the talented Prashanth Neel, the film is set in the Kolar Gold Fields located in the state of Karnataka and focuses on the ‘rags to riches’ journey of the protagonist Rocky/Rocky Bhai (Rocking Star Yash). The first part of this series was said to have one of the biggest openings for a Sandalwood film and was shown in approximately 2400 theatres.

Now, for the sequel, many exciting things have surfaced online. First one, Rocking Star Yash showed his excitement for KGF: Chapter 2 by posting the clapboard of the film on his social media. Take a look…

And it begins..
After KGF 1 being loved by u all,
CHAPTER 2 is all set to create double the Dhamaka!! Need your love and blessings as always 😊 pic.twitter.com/yI1Xb2r3Aa

Next, we learnt that there is a possibility that prominent Bollywood actor Sanjay Dutt is in talks with the crew to be roped in for the film. Having said that Raveena Tandon has been confirmed for the role of Rameka Sen in KGF: Chapter 2. Director Prashanth Neel also posted on his social media about his support and backup and called all the crew the heroes of the film. Take a look

The actual heroes of kgf chapter2🎬when the whole dream team gets together to celebrate their captain❤️Lots of love to you guys and you guys don't need any luck,coz you guys the are hardest working team❤️ #kgfchapter2#prashanthneel❤️

Some clicks from the first day of shoot…

And of Rocky Bhai with the director…

When you can't contain your smile ❤️They Wil bowl you over with not just with their smile but with their next dream project #kgfchapter2🎬 So when I asked prashanth what to caption this picture….he said not 2 but 4 Chapters🤣😂😂😂🤣he was kidding of course❤️ but we all want that to be reality😅😜😛 GUYS and GALS the shoot will start in a few days, last minute preparations are underway…and off they go to shoot our biggest dream❤️Will keep updating the bestest fans with exciting news🙏😍😊😊 #bestestteameverr😍#kgfchapter2🎬#prashanthneel❤️@thenameisyash

How excited are you for the second chapter? Let us know your thoughts in the space given below.

If you are a fan of the Roaring Star Sriimurali, watch his hit neo-noir film, Mufti on your ZEE5 now!

Take A Minute To Celebrate Friendship Like Upendra And Yash

Naagini Weekly Update 23 May-6 June 2019: Arjun Is In Trouble While Rudra Plans To Kill