She is fondly known by fans as the 'Sandalwood Queen' of Karnataka. Her return to the film industry was nothing short of great news for them. 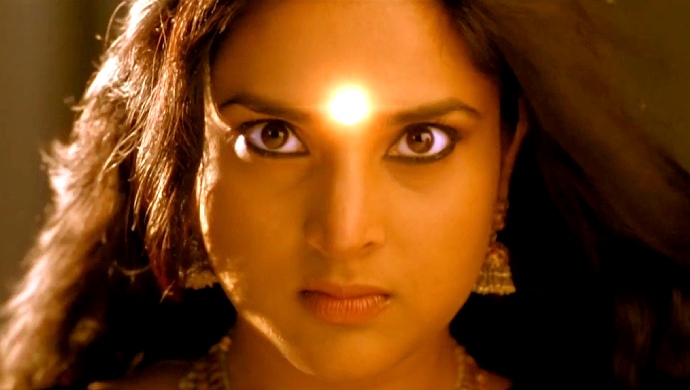 Making his debut in Sandalwood with the blockbuster Nagarahavu was the Telugu director Kodi Ramakrishna. This film is special for more than one reason. Marked as Namma Sahasa Simha Dr Vishnuvardhan’s 201st film, the commercial value was brought out through excellent CGI that enabled all fans to see him onscreen years after his untimely demise. If that wasn’t enough, Sandalwood Queen Ramya along with Diganth played the lead protagonists in the film.

While the movie is based solely on mythological-fiction, the cast and crew did perfect justice to give the audiences a proper show. Before signing up for Nagarahavu, Ramya had not taken up many film projects as she had to concentrate on her career in politics. But after much contemplation and not being able to resist the opportunity to be in a movie with the late Dr Vishnuvardhan, Ramya agreed to do the film. This comeback for Ramya could not have come at a better time because her role in the film was very challenging.

When she was interviewed by a leading media firm about how she felt about this movie and role, she said, “When I look at the trailers now and the songs and how Kodi Ramakrishna visualized the film back then, it’s amazing. When he narrated the script to me, I didn’t have that kind of vision. It has exceeded my expectations”. About her role in the film, she said, “I’ve never played a period character, so I was dependent on him for that. He has brought that out of me. I got a lot of feedback from people who have seen the trailers about how I’ve portrayed so much ferocity and anger”.

She further added, “I had to let go of a lot of my inhibitions to do that. In between breaks, he would sit down and tell us about his career and his times, and some of them were really funny stores. He kept that balance. As much as we say that directors of the past are not in tune with today, you can’t say the same of him”.

To begin with, Ramya had to play not one, not two but three different characters, with different personalities, backgrounds and temperaments. So, it is safe to say that her bucket of talents came in handy.

The first character Ramya plays is the successor of a warrior princess called Naganika. Many years before, an evil sage killed Naganika for a bigger purpose. Ramya takes rebirth in the form of the defender of the snake village present in Nagcharan’s house. The second character she plays is that of Manasa, a modern and trendy young woman who isn’t afraid to speak her mind and fight for what she wants. The final and most powerful character seen of Ramya is that of the actual snake itself. Her expressive eyes will surely give you a run for your money. The VFX team brilliantly complemented her acting with some amazing graphics of a blue halogen like a shadow around her.

I am sure fans must have had a visual treat watching these three versions of her in one movie that included the legend, Dr Vishnuvardhan as well. In the interview, she also mentioned that doing more films is entirely based on what is expected of her from her political career side. A difficult question for Ramya to answer indeed, but all we can hope is that she continues to amaze us with more movies in the near future, after all, she is our Sandalwood Queen!

Let us know about your favourite lead character from Nagarahavu in the space given below.

You can now stream all Diganth movies on ZEE5, here.

Jab We Met Is Your Weekend Getaway Into Romance, Laughter And Fun. Watch It On ZEE5 Now.