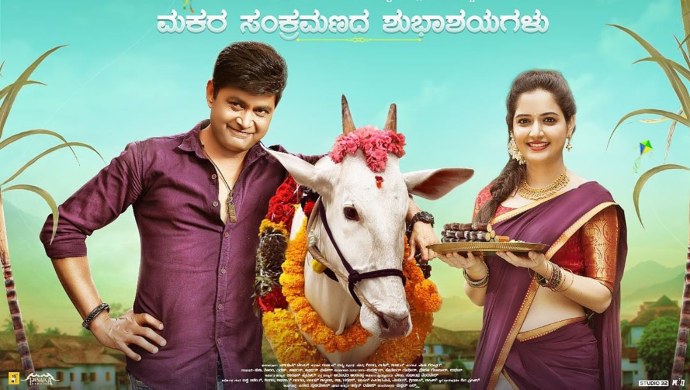 With the start of the New Year, everyone is super excited about the first festival, Sankranti, which is celebrated with joy and happiness throughout the country. Just like us, all our beloved Kannada celebrities are all ready to enjoy this harvest festival. However, this year, Rakshit Gowda and Ashika Ranganath, two of our favourite actors have some exciting announcements during this happy occasion.

These stars recently posted pictures on their respective Instagram accounts, wishing their fans in a unique way.

The actor, who won our hearts by portraying the role of Vedanth in the serial Gattimela, had a special announcement for all his fans. He posted the poster of his new movie along with a heartfelt message for all his fans. The poster features him in a traditional look where he dons a white dhoti and shirt while pairing it with a green scarf and yellow turban. This bold look that the actor tries, gives out the final image of a bold and strong persona he portrays. He wished all his fans as he wrote a caption in Kannada talking about the special moments of this festival.

Ashika Ranganath, the star who won her place with the debut movie Crazy Boy, is now ready with a new movie this festive season. The actress uploaded a picture featuring the poster of her new film, Avatarpurusha. The poster captures the rural feel and festive vibes of Sankranti as you can see her and her co-star Sharan Hruday who pose with a cow. She writes, “Happy Makara Sankranthi” along with this post as she wishes her fans and audience.

Both these actors are starting the new year on a positive note. The stars need all your wishes and luck. Tell us about your thoughts on these posters in the comment section below.

Puneeth Rajkumar And Priyanka Upendra's Sankranti Wishes For Their Fans