On tonight's episode, Kaushalya and Aparna are shocked to learn that Krishna intends to perform the pooja rituals of his father's death anniversary! 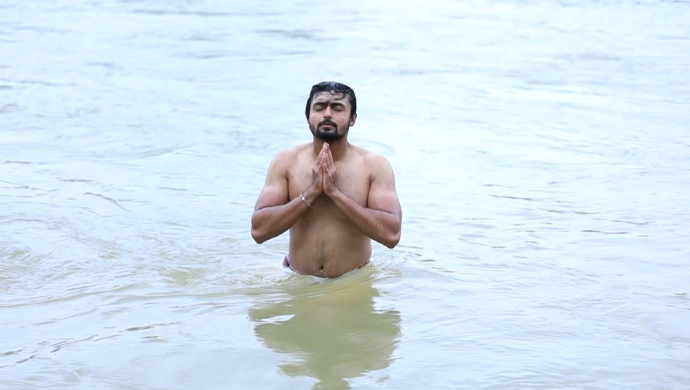 In the previous episode of Radha Kalyana, Krishna and Radha share a brief intimate moment when she falls from the stool and then on him. Annoyed, he asks Radha to stay outside his room when she offers to clean the mess. However, soon afterwards, Krishna finds the coin that was given to him by the girl who saved his life and recollects the entire incident of his father’s death. After a while, Krishna apologises to his father and vents out his sorrows of how much he misses him. Outside his room, Radha blames Krishna for not allowing to perform her grandfather’s death-anniversary pooja and vents out her frustration to his photo.

In tonight’s episode, while Radha apologises to her grandfather that she wouldn’t be able to perform his death anniversary rituals, Krishna realises that it is his father’s death anniversary today. He goes out of his room in search of Anand but finds Radha sitting outside and completely ignores her. She, on the other hand, tries to request permission to leave early when the coin slips and falls from Krishna’s hand.

He screams at her but finally finds the coin fallen on her langa. In an irate mood, he also gives permission to Radha to leave. Excited, she informs her thatha’s photo that she is coming to offer prayers to him soon. Elsewhere at the temple, the preparations for Kaushalya’s husband’s death anniversary rituals are just about to begin when Nakshatra asks Aparna the real reason why Krishna or Anand aren’t allowed to perform this particular pooja.

To this, she answers that she doesn’t want to force Krishna for anything after what happened to him to during the accident while Anand has announced that if his brother won’t do the rituals, he won’t too. Listening to all this, Kaushalya starts looking up in the sky and expresses her disappointment of not seeing even one crow in the sky. While the priest tries to instil courage in Kaushalya, their lawyer comes rushing to the spot and informs them that Krishna is headed their way.

Even though Aparna makes many attempts to ensure that Krishna doesn’t go near the place where is father’s photo is kept, the latter insists that he will perform this pooja the right way. He goes to the priest and enquires about what is to be done. He then goes to take a dip in the holy river and begins the pooja. At that time, Radha arrives at the temple where she is supposed to do her thatha’s pooja but is shocked to see Kanthamma and Likitha sitting there already.

What’s more, she spots Tulasi there too and prays to Rama that they both don’t see her or her mother. She then rushes to her mother and informs her about the seriousness of the situation. While they are waiting for the priest and trying to hide from Kanthamma and Likitha at the same time, Krishna completes the rituals. When the priest asks him to keep the edible balls (savoury laddoo) near the tree so that the crows may get it, Krishna gets curious and asks why must they be fed only to crows.

That’s when he learns that it is believed that when your loved one dies they visit you in the form of a crow. Despite knowing that there are no crows visible in the sky, Krishna keeps the offering near the tree and prays earnestly to his father to accept his offering.

Will his plea be accepted? Is Kanthamma at the temple only to stop Radha from doing what she wants to do? We’ll know in tomorrow’s update. Stay tuned.

Watch all the episodes of Sa Re Ga Ma Pa Li’l Champs Season 16, in case you missed it, here on ZEE5.

Have You Watched The Grand Premiere Episode Of Comedy Khiladigalu Season 3 Yet? If Not Click Here Right Away On ZEE5 To Get Your Dose Of Comedy