On tonight's episode, just like how Goddess Sita was abducted, Radha is abducted by her real-life Ravana aka Vajramuni. His disguise tricks her well! 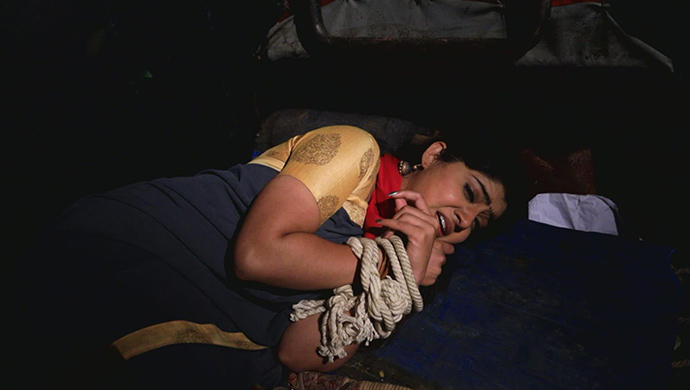 In the previous episode of Radha Kalyana, Krishna asks Radha to lie to the traffic inspector after tricking her into promising him that she will ensure that his dignity is maintained. Somehow, Radha is saved from this situation but the trouble isn’t far when she boldly claims that as his secretary she will wait for Krishna anywhere he asks her too. While he doesn’t allow her to go to a recital of the ‘Sita-Abduction’ incident from the epic Ramayana, he tries to have fun with her by making her stand on the side of the road. Then he draws a circle around her and asks Radha to stay in it till she returns. As the recital begins, elsewhere, Radha’s real-life Ravana aka Vajramuni appears in disguise asking for help.

On tonight’s episode, Radha curses her luck for being bound by the circle and worries for the old man (Vajramuni) who just got hit by a bike in front of her. Unable to resist helping him she crosses the line, just when the recital comes to the part where Goddess Sita crosses the ‘Lakshman Rekha’. Soon, as planned, Radha is abducted. When the reciter talks about Jatayu, who tried to save Sita from being kidnapped, the old blind man, whom Radha had given her food to before comes in front of the car in which she is being taken in.

While Vajramuni asks his men to check up on the blind man, Radha finds time to call her father. Unfortunately though, due to a bad network, Prasad knows something is wrong but isn’t able to hear her voice clearly. By this time, Vajramuni notices her on the phone and asks his men to handle it. Krishna, who returns to the spot he left Radha in is thrilled to find her missing and rejoices at the thought of a new secretary before going back home. At Radha’s house, Prasad gets worried when the dance-students come home and inform him that Krishna forcefully took her before.

Despite Kanthamma’s order to stay back, Prasad goes to the Gokula house. There, at first, Kaushalya isn’t able to understand why Prasad is pleading. When she learns that Radha still hasn’t come home she is shocked. To her annoyance, a drunk Krishna walks in at that time. Prasad rushes to the temple when an irritated Krishna tells him that she was talking about attending some recital and might have possibly gone there. Kaushalya gets mad with rage when she finds out that Krishna left Radha at the side of the road.

Without listening to another word from Aparna or Krishna, Kaushalya warns everyone that if he himself doesn’t bring Radha back home, she won’t eat another morsel of food or drink a sip of water. Krishna barges out of the house irritated and goes to his friends to ask them for help in searching for Radha.

How will Krishna find her? Where is Vajramuni planning to take her? Find out in Monday’s update.

Watch the Navarasa Nayaka in a serious role in the film 8MM Bullet, streaming in HD on ZEE5.

Relive Kichcha Sudeep As A Para-Commando Officer In The Blockbuster Film Hebbuli, Streaming In HD Here On The ZEE5 Platform

Gattimela 26 August 2019 Preview: Vedanth Gets Love-Letters In The Form Of Emails

From The Golden Era Of 70s To Now: A Brief History Of The Birth & Rise Of Kannada Cinema