In tonight's episode, Radha finds trouble in the pub that her boss Krishna has gone to. Further, Krishna gets a DUI ticket from the traffic police! 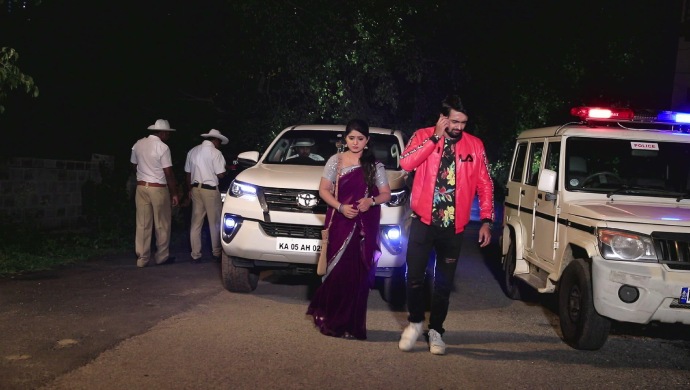 In the previous episode of Radha Kalyana, Krishna uses the opportunity of Radha having gone to the washroom to wash the coffee that accidentally spilt on her and escapes. Poor Radha gets worried that Krishna left without her and traces him all day. However, all her attempts to catch him fail. Elsewhere, Likitha and Kanthamma think of a plan regarding the former’s threat to Anand. Afterwards, Shri Krishna warns Radha that if she doesn’t find him in the next 30 minutes, she will lose her job. Luckily for Radha, despite Krishna tricking her about his location, Kaushalya calls her home urgently, which is actually where Krishna is hiding. At the end, when Radha stands in front of him in the given time, Krishna stands shocked.

On tonight’s episode, Radha reaches Shri Krishna just in time before his challenge is over causing him to be shocked. When he asks her about the person who told her his whereabouts, Radha tells Krishna that no one did, she figured it out herself. Radha recollects how she heard the wall clock in his room while speaking to him and reveals that her job is still intact because she found him in time. When she informs him that he has a pub-party to attend in the evening he is further startled.

Upon reaching the location Krishna makes Radha accidentally drop an expensive bottle of liquor and claims not to know her afterwards. As the bouncers of the pub are asking Radha to pay up an old man comes there and gets bad intentions looking at Radha. He then takes her inside and tries to flirt with causing Radha to get furious and slap him. She then runs away and hides from the old man near the exit. Luckily, the old man rushes outside looking for her and Krishna and his friends come down.

While leaving Krishna who is happy to assume that Radha must have left by now is annoyed to see her sitting in a corner and crying inconsolably. Without showing any sympathy towards her state while Krishna is talking to her, the bill arrives and Radha grabs it to pay up immediately. At home, Kaushalya gets very worried when Radha and Krishna don’t return even though it is midnight. When she calls Anand to ask him where his brother is, Aparna Devi and Nakshatra too, come out of their rooms. Unfortunately for Anand, neither Krishna not Radha’s phone is reachable.

While returning Radha is scared at the way Krishna is driving just as the latter spots the traffic police up ahead and stops the car. He then makes Radha drive the car, even though she has absolutely no idea how. The police soon catch them and seize Krishna’s car, causing him to get upset with Radha. Later, as they are walking home, Krishna constantly keeps cursing himself for getting Radha as his secretary, even though she is walking right beside him.

How will Radha and Krishna get back home? To find out stay tuned to Monday’s episode.

Watch the blockbuster film The Villain, starring Shivanna and Kichcha Sudeep, streaming in HD On ZEE5.

If You Like Socio-Political Films, Don't Forget To Watch The Sruthi Hariharan And Sathish Ninasam Starrer Beautiful Manasugalu, Streaming In HD, Here On The ZEE5 Platform

Like Bramhagantu's Geetha And Lucky, Here's How An Unconsummated Marriage Can Be An Issue