In tonight's episode, Kaushalya blames Krishna for Radha's injury and applies medicine to the wound. Kanthamma, on the hand, is ready to punish Radha 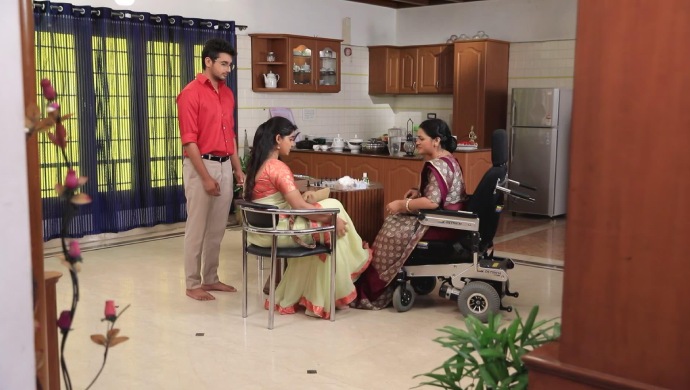 In the previous episode of Radha Kalyana, Radha reluctantly agrees to go on Shri Krishna’s superbike for some work he has. Her becomes worse when Krishna doesn’t care for any potholes on the way. Radha realises a little late that she is already part of a bike race that Krishna was late too. It’s no surprise when Krishna comes out a victor in the race. Not only does he completely ignore after his victory but also make her hold his bike. In an attempt to park, Radha injures herself by mistake. Vajramuni spots her on the way and tries to befriend her but she completely ignores him.

On tonight’s episode, Kaushalya and Aparna are playing chess when Krishna comes home. Nakshatra is surprised to see Krishna alone and asks about Radha. When he tells the ladies that Radha ever come back, Kaushalya gets upset. She then announces the importance of the Queen in a game of chess. A few moments later and much to her delight, Anand brings Radha home a little while later. Krishna’s rage starts increasing after seeing Radha’s face while Aparna Devi and Nakshatra look at her in disgust.

Upon seeing the bruise on Radha’s foot, Kaushalya gets upset with Krishna for his lack of responsibility towards his employees. Krishna is furious when his mother asks him to apologise to Radha for the bruise. He storms over to Radha and blames everything on her. Without apologising Krishna walks away to his room in a huff. After Aparna and Nakshatra leave, Kaushalya offers medical aid to Radha despite her pleas for the former not to touch her leg.

While leaving Radha thanks Kaushalya and goes to say bye to Krishna. He doesn’t take it well and yells at her again followed by a threat that he will make her life hell for not giving up the job. Later, Kanthamma and Likitha, who are waiting for Radha at home are flabbergasted to see Anand dropping Radha off. They later rebuke her for having an affair with Likitha’s one true love. Even though Radha tells them the truth that nothing is going on between them, Likitha intervenes and thoroughly demeans her step-sister.

What punishment is in store for Radha now? You’ll know after tomorrow’s update.m, so stay tuned.

Watch Natasaarvabhowma, only on ZEE5.

Did You Miss The Semi-Finals Round On Sa Re Ga Ma Pa Li'l Champs 16 Last Week? Don't Worry You Can Stream Here For Free On Your ZEE5

Gattimela 14 August 2019 Preview: Vedanth's Life Falls In Danger Because Of A Snake