On tonight's episode, Radha somehow escapes from being seen by Krishna as the pooja finishes. Later, Nisha calls Krishna to a location to trap him! 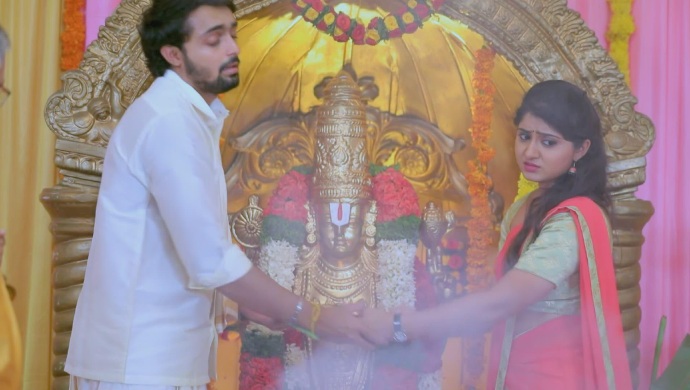 In the previous episode of Radha Kalyana, Kaushalya makes it indirectly clear to Krishna that if he steps out of the house, he will have to see her dead body when he returns. Speaking through Anand, Krishna asks her not to be so dramatic and stays back till the pooja is over. Elsewhere, Vajramuni comes home and demands Radha’s hand in marriage from her parents. Tulasi, who goes to make tea a while later, is lost in deep thought that she doesn’t notice her saree getting burnt. Meanwhile, the pooja begins at the Gokula mansion with Krishna sitting as the main guest. However, when the priest talks about his childhood, Krishna gets certain flashbacks that discomfort him. Kaushalya, who immediately recognises this uncomfortable face of Krishna snaps him out of it by calling out loudly for Anand. Just as the priest is taking him out to do some rituals, Radha arrives there scared.

On tonight’s episode, Radha tries to hide from Krishna as he is making an exit with the priest to conduct some rituals and is successful in being invisible. Just as Aparna and Kaushalya are wondering what to do about the gajamala, Radha enters the Gokula house. While Aparna scolds her for being late, Kaushalya is pleased to see her. Radha then apologises to everyone for the delay and expresses guilt for coming late. Much to her disappointment, Krishna comes back with the priest by this time and misses seeing her standing right behind him. The pooja then begins and the havan causes a lot of smoke, making Krishna’s eyes uncomfortable. During this time, thanks to fate, not only does Radha put the mala around the idol along with Krishna but the priest also asks her to help with the aarthi.

Soon, the pooja gets over and Krishna politely excuses himself. Relieved, Radha too, decides to take a leave but Kaushalya asks Anand to give her some extra money for doing such a good job. When Radha denies taking more than what she deserves, Kaushalya is impressed. At night, Nakshatra tries to make Krishna break his fast by ordering for his favourite pizza. Just as she thinks her plan is working, his ex-secretary Nisha calls him up. Shri Krishna is thrilled to know that Nisha has planned a party for him and he gets ready to leave immediately. Nisha, on the other hand, plans to teach Kaushalya a lesson for slapping her by enticing her son. Soon, one of her friends brings some sedative and is puzzled when Nisha wants to up the dose.

She injects the sedative in the alcohol bottle kept for Krishna. A while later, Radha and Nandini come to the same resort that Nisha is in and discuss how awesome it would be if all the orders from the resort came to them. Krishna reaches shortly afterwards and goes with Nisha to a private part of the resort. An impressed Krishna starts drinking heavily as he was able to drink before and is surprised when the drink hits him almost immediately. As they are waiting for the client Radha and Nandini decide to take a walk. Krishna, on the other hand, is super high by now and comes stumbling out of the private part of the resort with Nisha. In the end, he rams into Radha, who is busy taking a selfie with Nandini.

Will Radha save Krishna? What is Nisha’s real plan? Stay tuned to the next episode update to find out.

Watch the Rebel Star’s action sequences in Doddmane Hudga, if you are a fan, here on ZEE5.

Watch All The Episodes Of The Fourth Season Of The Blockbuster Chat Show Of Karnataka, Weekend With Ramesh, Streaming Now On Your ZEE5

Friendship Day: Janaki-Nanditha To Kamali-Anika, 5 Besties Who Give Us Friendship Goals