Protest Against Stay At Home Order In Washington, United States

People were seen holding signs like, “We demand freedom”, “Re-start our economy”. 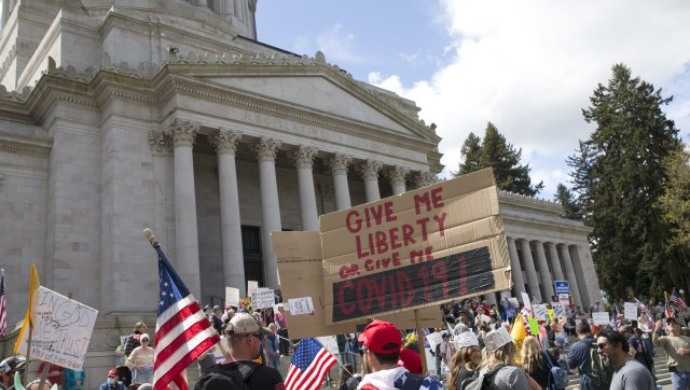 Demonstrators have come out against the state’s Stay At Home orders in Washington state. The protestors were out with the American flag and placards, in front of the Washington state Capitol building.

The protest is dubbed as hazardous liberty open for business, protests called for the opening of the state. According to US media reports, the rally drew around 1500 people as well. Demonstrators were protesting against Gov. Jay Inslee’s stay-at-home order, which was designed to combat the spread of COVID-19.

People were even seen holding signs like, “We demand freedom”, “Re-start our economy”.More than 16000 cases have been reported in Washington, with more than nine hundred deaths. Many experts believe that the transportation rates in the United States are worsening.

Washington remains under a state of emergency as schools, churches and non- essential businesses remain shut.The governor’s stay-at-home order ends in about two weeks, and he said some restrictions may extend beyond that.

Chinese Nationals’ Get Arrested In Nepal After Protest Turns Violent