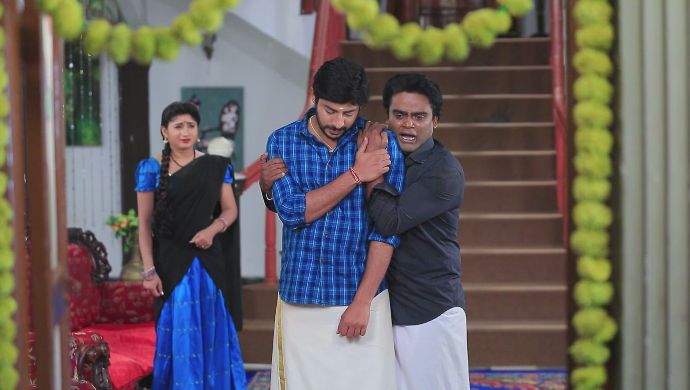 We’re hooked to Muttu and Belli’s complicated love story in Yaare Nee Mohini and bet you are too! As we all know, Maya is the biggest hindrance between them. While Belli is losing all hope of getting married to Muttu, Shanmugam, who treats her as his own sister, feels that she will succeed in getting married to his best friend Muttu. What makes Shanmugam even more special is the fact that he is not only a brother-like figure to Belli but plays the same sort of role in Muttu’s life.

Shanmugam’s concern for Muttu shows when he talks to the latter about Belli asking him how he plans on taking care of her. When the latter says that he will manage, Shanmugam makes it a point to tell him that Maya can go to any extent to prevent Belli from getting married to him. When Maya plans an attack on Belli when she is sick and no one is at the house, he discovers that a higher power is what protected her. As he narrates this incident to Aishu, he comes to the realisation that it is Chitra who has taken the form of Mohini to protect Belli.

On several occasions, Shanmugam has protected Belli from all the attacks that Maya plans on her. When he tries to expose her, Muttu asks him to leave the house. As the two have been childhood friends, he decides to listen to Muttu without saying a word. However, the unbreakable bond that they share is evident when Muttu apologises and tells Shanmugam that he will not be able to live without him.

As the date for Maya and Belli is coming closer, Belli tells Shanmugam that she wants to leave the house as she is heartbroken about the fact that Muttu is getting married to Maya. Shanmugam tell her to trust him as he will make sure that she gets married to Muttu. He also tells her to have patience and the two share a sentimental moment.

Isn’t he the best brother ever? Tell us what you think in the comments section below!