Presenting To You The Girl Who Rules My World: KGF Actor Rocking Star Yash On Baby YR

Although her parents haven’t named her yet, this angel is a fine blend of the handsome hunk Rocking Star Yash and his stunning wife Radhika Pandith. 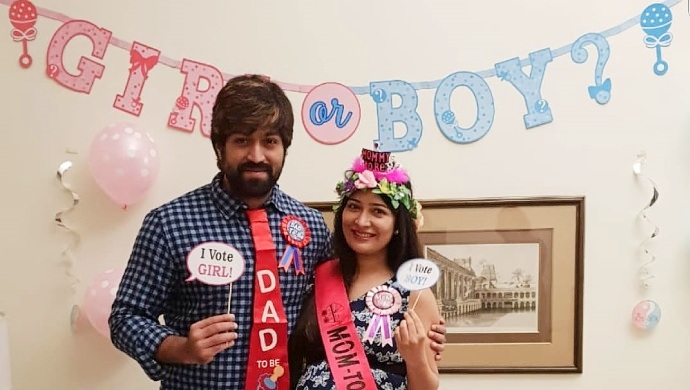 Known for his fantabulous work in the superhit film KGF: Chapter 1, Rocking Star Yash has ruled over Sandalwood since its release. Playing the role of Rocky Bhai, his exceptional performance left his female fan-following reach for a glass of water, I am sure. But what’s buzzing around on the internet now is his baby girl, who was born at the end of last year.

If you are a fan you must know how crazy the Rocking Star is about his wife, actress Radhika Pandith. Check out this adorable picture the actor shared of both of them, thanking Radhika for making him the happiest man alive! Awww!

To the best two years of my life ❤️ Happy Anniversary my love. You have given me the best gift ever. A new life and a new journey! @iamradhikapandit #NimmaYash

Now, getting to the lovely kid they named ‘Baby YR’ for now, the Rocking Star has finally shared his happiness with the rest of the world. Take a look.

For those of you who don’t know, Yash and Radhika made their TV debuts as well as film debuts together! Over the course of time, their love grew deeper and they fell head-over-heels for each other before tying the knot in 2016. Two years later, voila! While we haven’t seen much of their angel yet, so we’ll leave you with what Radhika thought of her man and their baby!

A father daughter relationship is a priceless one!! I know all of u are waiting to see our lil angel, won't disappoint u. This May 7th on Akshaya Tritiya.. we will reveal our true treasure.. our precious Asset 😊 #radhikapandit #nimmaRP

Give a shout out to this terrific-trio and wish them luck in the space provided below.

Watch Yash in the hit film Rajadhani, streaming for free on ZEE5.

12 Gradual Developments That Happened Since Paaru And Aditya’s Wedding Guilt Trip: A Recap

Rangbaaz Review: Saqib Saleem Was An Excellent Fit For The Character Of Shiv Prasad Shukla