Two journalists are on their way to cover the Kargil War. Circumstances and fate work together and incline their destinies, together forever. 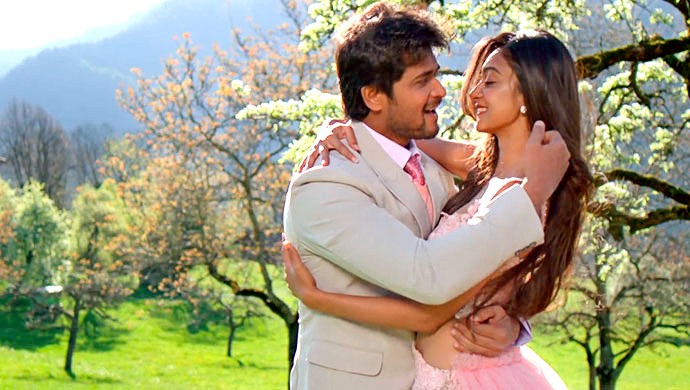 Prema Baraha, directed by Arjun Sarja and produced by his wife Niveditha Arjun, is a romance-drama film with a patriotic touch to it. Starring in the lead roles is Aishwarya Arjun, daughter of Arjun Sarja and Niveditha Arjun, and Chandan Kumar, who was previously a TV actor. The story focuses on two leading journalists, Sanjay (Chandan Kumar) and Madhu (Aishwarya Arjun), who are sent on a secret assignment to Kargil front to cover some exclusive footage for their respective firms. Initially they hate each other, however, fate brings them on the same page and eventually its a happy ending.

In my opinion, Prema Baraha is a mix of both traditional and modern values. For example, Madhu’s life is her grandpa, who is like her best friend and she never hides anything from him. So, although she has the utmost respect for him, Madhu loves him like her BFF. Director Arjun Sarja has smoothly introduced his little girl, Aishwarya, into a story that he is very comfortable telling, a patriotic one. His classics always have a patriotic element in them, so for fans as well as for viewers who have the utmost love for the country will have an entertaining three hours, I tell you.

#Premabaraha #Sollividava releasing this Valentine's week on 9th of February.

The cast includes prominent supporting actors like Rangayana Raghu as Sanjay’s father and Sadhu Kokila. Prema Baraha also saw the Sarja brothers (Chiranjeevi and Dhruva) and Challenging Star Darshan in a cameo role for the song Jai Hanumantha. So if you are a fan, their performance will be like icing on the cake that is Prema Baraha. The locations are a great advantage for this film because it gave the audience a good variety of scenic views, adding to the brilliant talent for artistry from the director. Of course, some are international backdrops but that’s the whole point of it, almost all the songs in the film, be it Prema Baraha-The title track or Manase Manase, are set in good visual settings and is one of the biggest factors for the film to gain such recognition.

The music composer Jassi Gift has got a power-packed set of songs that will cheer you up instantly. And hey, Paan Banaras and Jai Hanumantha are two songs for which no-dancing absolutely won’t do, so get up and shake a leg without fail while watching these two songs, I know I did! Towards the end-credits of the movie too, Director Arjun Sarja entertains the fans with some behind-the-scenes dances to the mashup of the title song. Don’t forget to check that out too.

Finally up!! 💃🏻Thaaank youuu @poonamandpriyanka for the wonderful choreography!! 🙏🏻❤️ Hope you all like it 😇

Aishwarya Arjun herself, in my opinion, has easily overshadowed Chandan Kumar, who was exceptional for his part, but clearly, the film was all about Madhu, the excessive talker who is cute as a bunny. Chandan Kumar, on the other hand, did a super-fab job at being the hero. So much so that, in the end, he lets his love Madhu go freely, and she returns to him.

ಇನ್ನು ಕೆಲವೆ ದಿನಗಳಲ್ಲಿ ನಮ್ಮ "ಪ್ರೇಮಬರಹ" ಚಿತ್ರವು 50 ದಿನಗಳನ್ನು ಪೂರೈಸಲಿದೆ, ಈ ಯಶಸ್ಸಿಗೆ ಕಾರಣರಾದ ಎಲ್ಲರಿಗು ಧನ್ಯವಾದಗಳು, ಸದಾಕಾಲ ನಮ್ಮನ್ನು ಹರಸಿ ಪ್ರೋತ್ಸಾಹಿಸಿ #PremaBaraha completes 50 days next week. Thank you all so much for all the appreciation and luv that you've shown towards the movie and special thanks for giving me such a warm welcome into the Kannada Film Industry. Had to cut down the scene due to time constraint. But I hope you enjoy it. ❤️ P.S I've really loved watching all your Dubsmash videos for this scene. 👏🏻👏🏻🤗

Her last dialogues still, however, remain super fast but the idea is that life-long he will have to bear her talks and he can’t do much about it, you know how it goes, kids nowadays! In one simple sentence, I would describe Prema Baraha as a lovely romantic story with a pinch of patriotism that can be served to a family of four or more!

What was your reason for watching Prema Baraha? Let us know in the space given below.

Watch your favourite Kannada movies on the ZEE5 platform to kill that thing called boredom.

Challenging Star Darshan Gave A Cameo Dance Performance In The Hit Film Nagarahavu Too. Click Here To Watch The Film Right Away

3 Sandalwood Actors And Their Bollywood Doppelgangers: Do You See What I See?