Prakash Belwadi Shares His Experience Of Working With Ramesh Aravind, Big B, Shivarajkumar

In an EXCLUSIVE interview, Prakash Belawadi shared his experiences with co-stars from films like The Tashkent Files, Airlift, Mufti and Youngistaan. 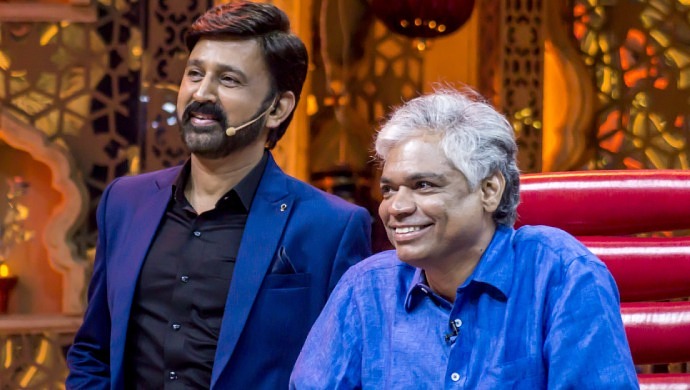 Prakash Belawadi, who recently appeared on Weekend With Ramesh Season 4, had a wonderful time on the red seat, with his old pal Ramesh Aravind, the host. The actor, activist, journalist and theatre personality recently sat down with us for an exclusive interview about his time on the show as well as other personal things about his life. The actor whose latest project was the Bollywood film The Tashkent Files spoke to us about his college days, and how he knew the actor/host Ramesh Aravind.

His answers were surprising and refreshing at the same time because of the way he spoke about the host of Weekend With Ramesh. As it turns out, Ramesh was four or five years his junior. But Mr Belawadi immediately continued by saying, “Firstly, Ramesh doesn’t look four or five years my junior, he looks a mint-fresh hero, okay, (laughs) so that’s the first thing.”

He then mentioned that for as long as he could remember Ramesh was always a bundle of talent and great in his creative work. The Tashkent Files actor said, “As a compere, as a writer of skits, as an actor who performed on these skits, he is also somebody who directed these skits. He has always been very good as an actor, you know, he is multilingual, he is very casually good in many languages and he is a very nice person. I worked under him when he was directing a Tamil film.”

The actor and activist then recollected how surprised he was at Ramesh Aravind’s brilliant academic scores in college. He also appreciated the fact that the latter led a well-balanced life. In one sentence, Prakash said, “And for somebody like that who is talented, who is really bright, who is pretty successful, to retain that capability for humour, for the tolerance of other people, for affection, I think it is very heart-warming.” Lastly, he appreciated the incredible stamina his pal had to shoot for such long hours with unflagging energy. He went on to clarify that such energy is only possible if you have empathy and acceptance of other people. “I think he is a very gifted person, especially because of that,” said Mr Belawadi.

The next question we asked him was about his best experience working with a co-star. The actor began by reminiscing memories of himself and the late legend Farooq Sheikh, whom he had met during the film Youngistaan. “Farooq Sheikh was the most intelligent, politically informed co-actor that I worked with. He was a great pleasure to be with and have a conversation with,” said Prakash Belawadi fondly.

The second actor he spoke about was someone who completely took him by surprise. Apparently, the Bollywood icon Mithun Chakraborty’s knowledge for economics and science took the activist by complete surprise. He praised Mithun Da, as he is fondly known, by saying, “The second person who completely surprised me and blew me off with his great political acumen and knowledge of international economics and politics has been Mithun Da. In the Tashkent Files, he has an absolutely outstanding mind and he really knows a lot that I was completely taken aback of how well-versed he is with both economics and politics.”

When it comes to icons, how can anyone forget the greatest icons of Bollywood, Mr Amitabh Bachchan. While talking to us, Mr Belawadi broke into a blushed giggle because he confessed what a big fan he was of the great veteran. For small acting roles, he got the chance to spend a few precious hours with Mr Bachchan. The Mufti actor also claimed to have grown up watching his films during his adolescent years.

Additionally, Prakash revealed that some of the nicest people he worked with were John Abraham, Akshay Kumar, the Malayalam actress Lena Kumar who played Prakash Belawadi’s on-screen wife in Airlift and Nimrat Kaur from Airlift. He then spoke about his favourite Sandalwood actors. “Of course, many Kannada actors, you know, I really enjoyed working with both Shiva Rajkumar and Puneet Rajkumar, who are terrific people, both of them. Rajesh, who is a Kannada actor, I have really enjoyed working with him,” he concluded.

If you are a fan of the Mufti actor, give him a shout out in the space provided below.

All you romantic movie buffs, watch the Puneeth Rajkumar starrer (only voice) Rajaratha, on ZEE5 now.

For Those Of You Who Haven’t Watched Mufti, You Can Do So By Clicking And Streaming It On ZEE5

Gattimela 10 May 2019 Written Update Of Full Episode: Amulya Is Back In Vedanth's Company