Parvathi Takes Akhila’s Place To Fool Makrand: What A Slap In The New Villain’s Face

A lady, whose identity is yet to be revealed, is after Akhilandeshwari’s life. Will Paaru be able to save her God from this demoness? 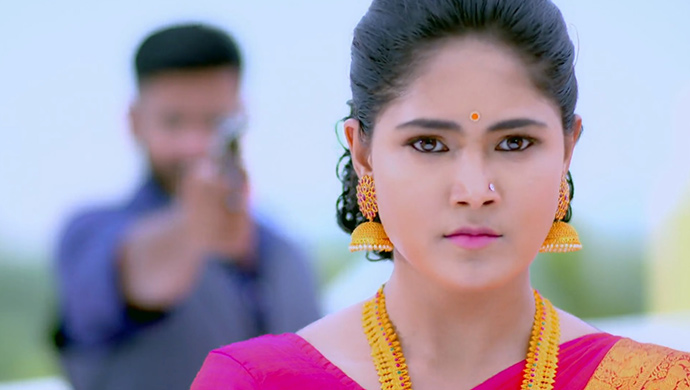 For all Paaru fans, this is just for you! A new antagonist seems to be making her way into the show. We don’t who she is yet, but her ‘A’ bracelet is definitely on many of our minds. Her first appearance was when she gave a contract killer called Makrand Kaale money to kill Arasane Koteya Akhilandeshwari. No one knows who or why she has such animosity against Akhila but Kaale somehow made his way into the house. Despite his efforts to get to work with Akhila started off smoothly, Paaru could see the contract killer for what he is. No matter how many times she tried to warn Aditya and Preethu, her pleas were unheard. Now, comes the best part. The new villain was gutsy enough to entire the premises of the Akhilandeshwari mansion as well as abduct Kaale’s dead body!

Before you get all confused about how Makranth became a dead body by the end of it, let’s take a recap to the moment when the new villain showed a glimpse of what she can do to Aditya, Preethu, Paaru and Gani. Ready na?

1. Paaru uses Gani’s idea and dresses up as Akhilandeshwari

2. Makrand starts making his way into the house to do what he went there to do

3. Paaru looks at herself in the mirror and promises herself that she won’t let anything happen to Akhila Amma for as long as she is alive

4. On the way to the temple, Gani gets talking with Aditya and Preethu and tells them about his favourite movie Aaptamitra

5. He also tells the brothers about how Paaru was behaving conspicuously when he told her about the climax of the film

6. By this time Parvathi stations herself on the terrace in a way that Makrand sees her and assumes that she is Akhila

8. At the Akhilandeshwari mansion, Paaru isn’t able to bear any more insults to Akhila and shows herself to Kaale

9. When she asks Makrand to stop with the chatter and shoot her, Aditya, Preethu and Paaru arrive in find the terrace door locked

10. While Parvathi tries to get hold of Kaale’s gun by this time, Adi and Preethu try to break open the door

11. Aditya gets hold of Kaale’s gun just in time and asks Makrand to reveal the truth about who sent him

12. Just as Kaale is about to reveal a name, a bullet finds him right in the head and he collapses dead

13. By the time everyone reaches down, Kaale’s body goes missing and they wonder how it is possible

14. Soon, they hear the sound of a car, from which an unknown lady again reveals the ‘A’ bracelet and drives off

15. Akhila who learns of this later thanks Paaru for taking such a big risk for her

Now we must wait and see who this new antagonist on the show is, and for that, you will have to stay tuned of course!

Who do you think this new nemesis of Akhilandeshwari is? Your comments are appreciated in the box given below.

If You Are A Fan Of Sumalatha Ambareesh There Is No Way You Miss Her Film Thayige Thakka Maga, Streaming On ZEE5

Kamali TWIST: A Shocking Flashback Reveals Why Annapoorna Made Kamali Her Mommagalu