From Shrungarada Hongemara to Ee Vayasali, Panchatantra has songs that will appeal to the youth thanks to singers like Vijay Prakash and Raghu Dixit! 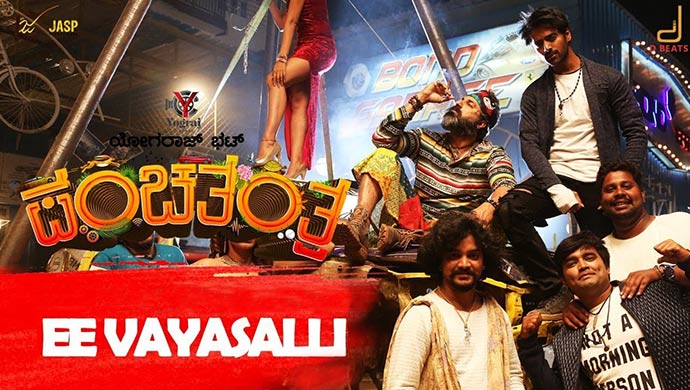 The Yogaraj Bhat directorial Panchatantra is a story that revolves around a group of youngsters and senior citizens, who despise each other. They then decide to compete against each other for a piece of land that’s under litigation in a professional car race. Starring Vihan Gowda as Karthik, the leader of the bunch of youngsters, and Rangayana Raghu as Ranganna, the leader of the senior citizen’s group, the film is also a love-story. Sahitya (played by Sonal Monteiro), Ranganna’s daughter, and Karthik are in love since childhood but cannot freely express themselves because of her father. The crux of the story, however, is the race. It all boils down to who will win the car rally and take control of the land?

While Namma Bhatru has given fans an exceptional youth-centric story, music director V Harikrishna has kept the tempo of the background score and music at an all-time high throughout the film. What is surprising is that all songs have been a hit with the fans and on social media since its release. So without further ado, let’s get into the playlist that you can listen to this weekend, shall we?

Sung by the musical maestro Vijay Prakash, this song is an intimate one, but carries with it a folk tune on the sidelines. It is blissful to listen to and visually appealing, thanks to VP sir and the lead-duo (Vihan and Sonal). The contemporary steps added to the romantic tune will get you into the groove.

You can call this quirky track the ‘break-up’ song of the year. Why? Because for a brief period, Karthik goes through heartbreak because of his hudgi and is seen joining a peace camp somewhere in Goa. Singer Vasuki Vaibhav has not only sung this song splendidly but has also done a sakkath rap sequence in the middle.

Shashank Sheshagiri lent his voice for this lazy party song, that will most definitely make you hit the dance floor. The song is shot in the garage-set that was made for the film and will give you a full party vibe. Ready to dance?

The biggest rivalry on the film is of Karthik’s team and Ranganna’s team. Just before the race begins, Neene Helu Mankutimma prepares both the groups to get healthier and fit. Music legend Raghu Dixit has sung this song and you will absolutely fall in love with it.

Which song would you pick as your favourite among the lot? Send in your choices in the space given below.

Watch Rangayana Raghu in the comedy-drama film Melkote Manja, streaming on your ZEE5.

Watch The Vaijanath Biradar Special On Weekend With Ramesh Season 4 If You Are A Fan Of The Veteran Actor, Only On The ZEE5 Platform