She may be a senior actress but her attitude towards everyone is worth learning and inculcating in your life. 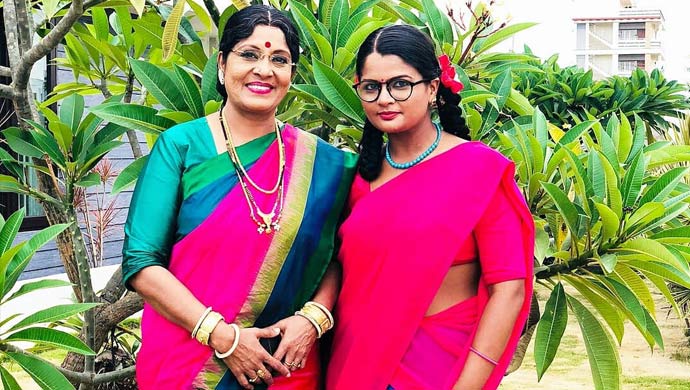 With an abundant list of accolades in her name, Padma Vasanthi ma’am, or better known as Annapoorna from the hit show Kamali, is primarily an awesome human being. She has a long history of working with some of the best in the Kannada film industry. Recently, however, she switched to the small screen and is well on her way to making an impact.

What we love about this senior actress is that she loves spending time with youngsters, who equally enjoy every moment with her. Whether it is a pouty selfie or a funny pose, this Kamali actress is right there chilling with the youth. Ningi, Kamali and Anika look up to actresses like her and never hesitate to get a picture clicked. A respectable actress in the industry, Padma Vasanthi is the coolest Ammamma you’ll ever know. Check out these sassy pics of her and the gals of Kamali.

1. Kamali is her favourite!

Her character on the show is that of an influential woman, owning a massive empire that includes many businesses and a chain of colleges. Her grand-daughter Anika is one of the antagonists on the show and they don’t see eye-to-eye in most situations. Instead, her heart goes out to Kamali and anything she does. Watching this lady onscreen is an inspiration to many of her fans because of her sheer persona! Our hats off to this veteran actress, who is young at heart and in the mind!

Give her a big shout out in the space below if you are a fan!

12 Important Things That Took Place On The Show Kamali This Week, In Case You Missed It