Your jaw will drop after checking out this flawless 'Indian Traditional Wear' photoshoot of namma Anushka from Paaru aka actress Mansi Joshi! 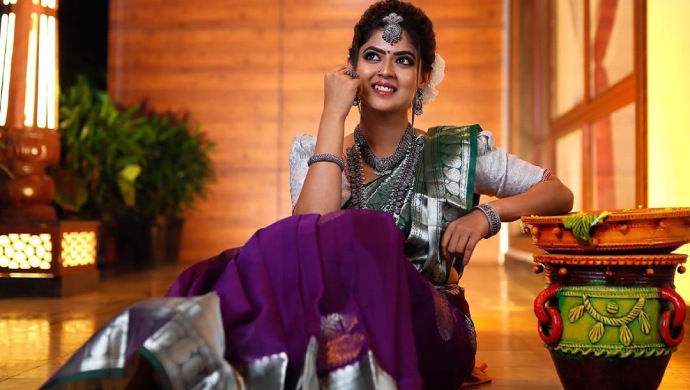 She plays the role of a vicious businesswoman named Anushka on the hit Zee Kannada show Paaru but in real-life Bengaluru based Mansi Joshi is a doll. Initially, when the show started, no one would have guessed that there would be any other prospective partner for Aditya except for the sweet and timid Parvathi Hanumantha, the daughter of his personal driver.

But the show makers threw in the twist with Anushka, a young woman Akhila really admires only because she is well to do and has successfully run her business on her own. But like they say looks are deceptive because the sweet and innocent-looking Anushka turns out to be the villainess of the show.

While that is her onscreen character, actress Mansi Joshi can be categorised in the ‘Natural Beauty‘ list like namma Aarthi Manjunath from Gattimela. When we say natural beauty we mean that you don’t need makeup to accentuate their flawless faces. However, with makeup, it only enhances their look further.

To prove the same we came across a recent photoshoot that Mansi did in full traditional apparel and accessories. Time to scroll…

1. Mansi Joshi looks drop dead gorgeous as an Indian bride (her pic caption is the highlight!)

Being a woman is a plus and not a minus. Adore it and respect it. I love getting dressed in a traditional way. ❤️ This was a memorable shoot and it was worth it ☺️. Delighted to have worked with the following talented people. MUA and outfit by @makeoverby_harshitha Hair by @hair_by_poornima Pictures clicked by @weddingraja Jewellery by @rental_jewellery2018 . . . . . . . . #saree #blacksaree #anushka #Paaru #photoshoot #bridalmakeup #bridalshoot #hairandmakeup #hairstyles #outfitinspiration #woman #jewellery #jewellerymaker #makeup #zeekannada #actresslife #makeuptutorial

2. As good as a life-sized painting, don’t you think?

3. If you didn’t know about this actress, wouldn’t this be as good as a graphic image? I mean, it is that perfect!

4. The Goddess side of Anushka shines brightly in the picture…

5. A sober example that flawless beauty exists on this planet earth…

The only real elegance is in the mind; If you've got that, the rest really comes from it. This subtle look created by our @makeup_by_kasturi made wonders the day.. 😘 thank you. Thank you @labelbypraayash for this elegant saree.♥️ Thanks to @the_flawless_studio for stitching such a perfect blouse.😍 Thanks to @rajsilverjewelry for those gracious antique silver jewellery ☺️ And finally thank you @saleemarthouse @santhosh_santhu19 for clicking these wonderful pictures at the right time and the right place ☺️ . . . . . Y'all must contact the above for a flawless look like mine for your special occasions. . . . . . . . . #photoshoot #purplesaree #makeup #makeuplooks #portraitphoto #Paaru #anushka #anvita #radharamana #hairstyles #hairdo #oote #outdoors #outdoorshoot #silverhair #silverjewellery #bridalshoot #bridalmakeup

Which outfit would you choose on your next big event? Speak to us through the comments box given below.

Watch Chemistry of Kariyappa for more entertainment on ZEE5.