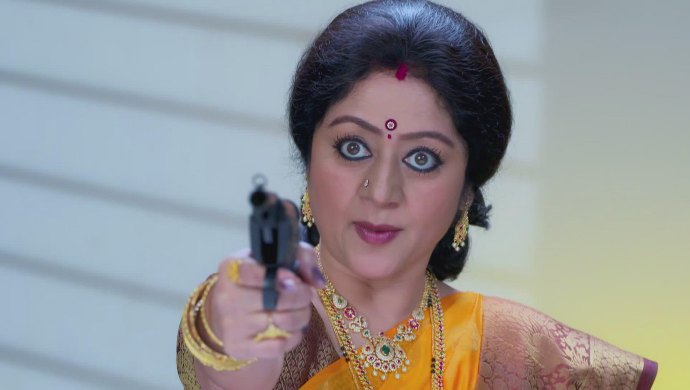 Earlier in Paaru, Preethu tells Adi the truth of being in love with a girl called Janani. He also asks Adi to help him telling their mother but Adi refuses to help him. Paaru convinces Adi and tells him that, as a brother, he must support Preethu. Preethu, Adi and Paaru decide to tell Akhila about it.

Damini searches for Paaru but cannot find her anywhere. While searching for her, she sees Paaru with Adi and believes that the two in love.

Damini plans on telling Akhila. She also dreams of all the jewels that Akhila will give her as a reward for telling her the truth about Adi and Paaru.

Akhila takes a gun and points it at Damini for constructing a story about her son. However, that turns out to Damini’s imagination.

Elsewhere, when Preethu goes up to Akhila to tell her the truth about Janani, the girl he’s in love with. But he doesn’t gather the courage to do the same.

Later that day, Preethu cries to Adi telling him that he has lost all hope regarding his marriage to Janani. Adi tells him to have patience and talk to Akhila honestly.

On telling Akhila the truth, she is furious and sends him out of the house but Adi convinces Akhila to listen to what Preethu has to say before taking such a vast step.

Akhila listens to Adi and asks Preethu to tell her whatever he has to say. He confesses his love for Janani and tells Akhila how Janani has made him a better person.

Akhila tells him that he wants to meet Janani.