Preethu feels guilty for having put Adi through so much trouble; Janani consoles him 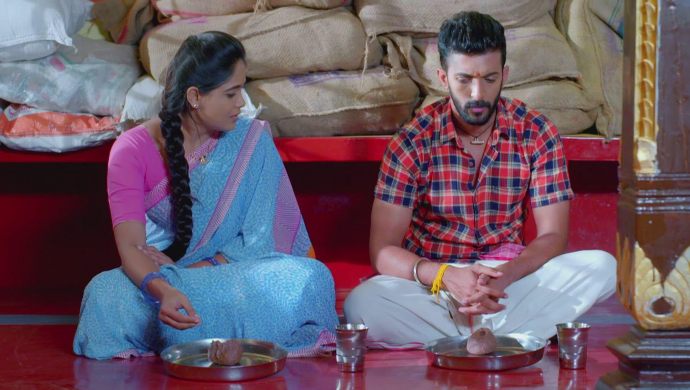 In the earlier episode of Paaru, Paaru and Adi have arrived at the village and are disguised as people from a small town and have gone to Janaki’s grandfather’s house in the name of Parvathi and Parmeshwara. Parvathi and Adi are assigned respective jobs of cleaning and cooking. Meanwhile, Preethu is having a difficult time adjusting to the lifestyle of Janaki’s family.

In this week’s episode, Preethu is tense about the situation in Parmeshwara’s house. He is pacing up and down and is confused as to what the outcome of this act will be. Rajavishnu is sitting with him and telling him not to worry so much but Preethu is still worried.

Just then Adi and Paaru come outside to console him. Adi tells him that he is the older brother to Preethu and he will do whatever it takes to get him married to Janani.

When they all depart, Paaru tells Adi that all of them need to be careful about being together or they might get caught by Parmeshwara. As the two are talking, they share a romantic moment where Adi thanks her for supporting him through everything.

The next day, all the villagers have gathered together at Parmeshwara’s house. They are all expressing the problems that they are facing in the village.

Just then, Paaru explains to them the need to focus on agriculture and being self-sufficient and tells them that half their problems will be solved once they are self-sufficient.

Parmeshwara is highly impressed. The next day, he advices Adi to take his responsibilities seriously. Adi agrees with him.

Meanwhile, Akhilandeshwari is worried about her children. Her husband tries to console her but she finds it difficult to even consume food without their presence.

EXCLUSIVE: 7 Pics Of Chandrashekhara Kambara, Guest #2 This Week On Weekend With…

7 Sandalwood Actress Who Are Painting The World Pink